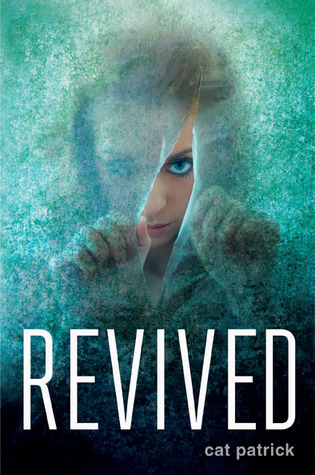 Summary: It started with a bus crash.
Daisy Appleby was a little girl when it happened, and she barely remembers the accident or being brought back to life. At that moment, though, she became one of the first subjects in a covert government program that tests a drug called Revive.
Now fifteen, Daisy has died and been Revived five times. Each death means a new name, a new city, a new identity. The only constant in Daisy’s life is constant change.
Then Daisy meets Matt and Audrey McKean, charismatic siblings who quickly become her first real friends. But if she’s ever to have a normal life, Daisy must escape from an experiment that’s much larger–and more sinister–than she ever imagined.
From its striking first chapter to its emotionally charged ending, Cat Patrick’s Revived is a riveting story about what happens when life and death collide

This is a novel that has a cool concept, but feels as if it is trying too hard to capture a teenage audience. It feels as if the author forgot what it was actually like to be a teenager. Or maybe I just wasn’t so frivolous and boy obsessed. Or maybe the beginning just didn’t interest me. Who likes to read about normal teenage life? I know some people love contemporary romance, but I find it rather boring. My interests are the unusual, the extraordinary, the dark and fantastical. The beginning of this fell flat for me. I almost gave up reading because the beginning was so vanilla.

This book tackles the question that is almost never approached with books that involve some sort of key to immortality. What about the sick people? Who decides who gets to live and who dies? What are the limits to immortality? These questions are almost never answered, but they are in this book.

A lot of this book felt like it was trying too hard. Daisy, the main character, isn’t even awake for what should be the climax of the book. The plot, what plot? The plot sucks and is practically nonexistent. Some parts just felt so forced. It’s a cool concept, the life saving drug and the witness protection kind of lifestyle, but this book did not fulfill its potential by a long shot. I think a large part of the reason that it fell so flat is because the characters were so basic. Their personalities were vanilla and they had virtually no flaws. At least it was a quick read, because I’m disappointed.