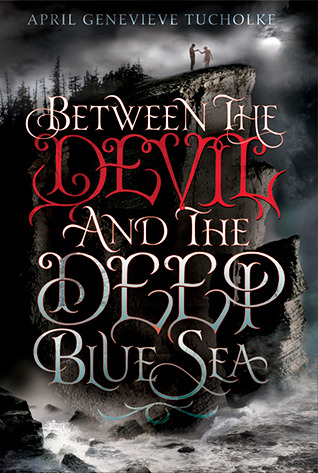 Summary: You stop fearing the devil when you’re holding his hand…

Nothing much exciting rolls through Violet White’s sleepy, seaside town… until River West comes along. River rents the guest house behind Violet’s crumbling estate, and as eerie, grim things start to happen, Violet begins to wonder about the boy living in her backyard.

Is River just a crooked-smiling liar with pretty eyes and a mysterious past? Or could he be something more?

Violet’s grandmother always warned her about the Devil, but she never said he could be a dark-haired boy who takes naps in the sun, who likes coffee, who kisses you in a cemetery… who makes you want to kiss back.

Violet’s already so knee-deep in love, she can’t see straight. And that’s just how River likes it.

Blending faded decadence and the thrilling dread of gothic horror, April Genevieve Tucholke weaves a dreamy, twisting contemporary romance, as gorgeously told as it is terrifying—a debut to watch.

I picked this book and it’s sequel up at a used book sale in my city for a dollar each. I’ve been on a YA fantasy kick lately, and this series looked like it fit the bill. But I didn’t have extremely high hopes for this book for some reason. Maybe it’s the cover, which in my opinion is kind of mediocre. Regardless, I didn’t expect it to be half as good as it was. The writing is incredibly descriptive, but manages to be insightful rather than boring. It is written in a voice that is full of personality and feels refreshingly genuine.

Parts of this book are descriptively gory and graphic. It carries a gothic, Tim Burton kind of air. If that’s not your thing, pass on this book, but if you can appreciate that kind of stuff, then you might just fall in love with this book. The character development is done so well that I found myself able to relate to a character that acted in demented and psychopathic ways. I even found myself agreeing with justifications for some really twisted actions.

I treasured reading this book. Luckily for me I also have the sequel. But I think I’m going to put off reading it for a while because I don’t want this story to end. This is one of those novels that I will never forget. I would love to see Tim Burton turn this into a movie, as I believe he could capture the atmosphere.

Between the Devil and the Deep Blue Sea exceeded my expectations by a mile. I found myself in love with the writing and the characters especially. They each had so much personality and were a bit eccentric. Every one of them felt like real people. I’m going to be on the look out of anything else by April Genevieve Tulcholke because she truly is an artist.

18 thoughts on “Between the Devil and the Deep Blue Sea”