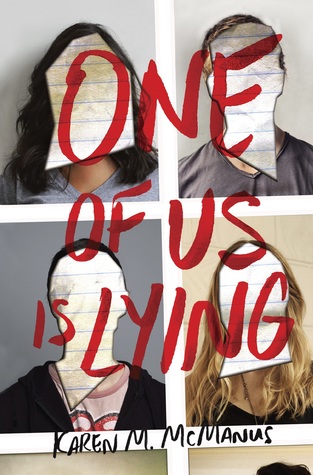 Summary:  The Breakfast Club meets Pretty Little Liars, One of Us Is Lying is the story of what happens when five strangers walk into detention and only four walk out alive. Everyone is a suspect, and everyone has something to hide.

On Monday afternoon, five students at Bayview High walk into detention.
Bronwyn, the brain, is Yale-bound and never breaks a rule.
Addy, the beauty, is the picture-perfect homecoming princess.
Nate, the criminal, is already on probation for dealing.
Cooper, the athlete, is the all-star baseball pitcher.
And Simon, the outcast, is the creator of Bayview High’s notorious gossip app.

Only, Simon never makes it out of that classroom. Before the end of detention, Simon’s dead. And according to investigators, his death wasn’t an accident. On Monday, he died. But on Tuesday, he’d planned to post juicy reveals about all four of his high-profile classmates, which makes all four of them suspects in his murder. Or are they the perfect patsies for a killer who’s still on the loose?
Everyone has secrets, right? What really matters is how far you would go to protect them.

This is a book that you don’t want to miss!

I had to check this one out because of all the hype. By the end of the first chapter I was completely hooked. I found myself thinking that maybe I shouldn’t of started at 1 AM because I knew that I was going to be up late. I played detective the whole time that I was reading this I highlighted and made notes with my Kindle, trying to solve it. Just when I was starting to feel like I was getting close, something would pull me in another direction. Saying this was captivating is an understatement by far. Get a copy because One of Us is Lying is a murder mystery that keeps you guessing and is filled with interesting characters.

The story switches from the viewpoints of the four main suspects. Each character is developed so well that you can’t help but see the good in each of them as the narratives give you the backstory on each suspect. Most mysteries are so wrapped up in the plot that they don’t develop characters like this. Which is one aspect that makes the stand out apart from the genre. This was so good that I had me wanting to going to murder mystery kick and give fantasy a break for a while. And that is saying something because I love fantasy.

I really want to give this five stars, but I didn’t get the ending I wanted. The whole thing was kind of anti-climactic. I found myself disappointed and a little unhappy with the way everything ended. It definitely could have earned a five-star rating. The ending was just very dull in my opinion.