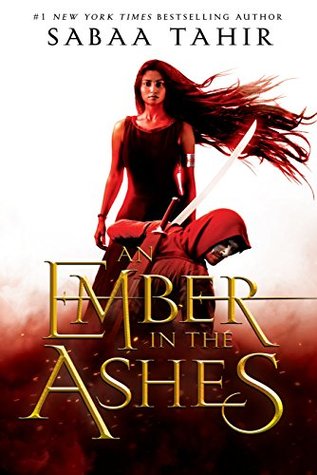 Summary: Laia is a slave. Elias is a soldier. Neither is free.

Under the Martial Empire, defiance is met with death. Those who do not vow their blood and bodies to the Emperor risk the execution of their loved ones and the destruction of all they hold dear.

It is in this brutal world, inspired by ancient Rome, that Laia lives with her grandparents and older brother. The family ekes out an existence in the Empire’s impoverished backstreets. They do not challenge the Empire. They’ve seen what happens to those who do.

But when Laia’s brother is arrested for treason, Laia is forced to make a decision. In exchange for help from rebels who promise to rescue her brother, she will risk her life to spy for them from within the Empire’s greatest military academy.

There, Laia meets Elias, the school’s finest soldier—and secretly, its most unwilling. Elias wants only to be free of the tyranny he’s being trained to enforce. He and Laia will soon realize that their destinies are intertwined—and that their choices will change the fate of the Empire itself.

This book was epic. The world building and character development transported me into a world of brutality that Elias and Laia lived in. I also gained a whole new perspective on how brutal slavery can actually be, and my eyes were opened to how monsterous brutality and war truly make people. This book was a slow burn, but I loved it. I found myself so empathetic for all the characters. Sabaa Tahir made the story come alive. I like to think that I read a lot of great young adult fantasy, or just fantasy in general. I have read The Game of Thrones series along with many other books I considered incredible. But when I was told that I needed to read her work as well, I didn’t know what I was missing.

The fantasy elements were not the main focus of the novel, but did appear throughout the story. The focus was more of the political elements of the Masks, who were assassins, and the slaves and rebellion. The way the slaves were treated was horrific. The novel also focused on the trials that four Masks had to go through to fight to become the new Emperor.

The plot was so captivating. I found myself completely engrossed in the world and characters that Sabaa Tahir created. I knew that her writing would be good, but I heavily underestimated her. The cover does not do this book justice. The rising action climax held so much intensity, as did the trials through Elias’ point of view. I even appreciated the romance.

The character development is really where this book shines. I would follow these characters to the rest of the series, I feel so attached to them. I’m so glad that I didn’t judge this one on its cover because I would’ve never pick it up. This is the first book that I read by Sabaa Tahir, but it won’t be the last. She is a legend for a reason.