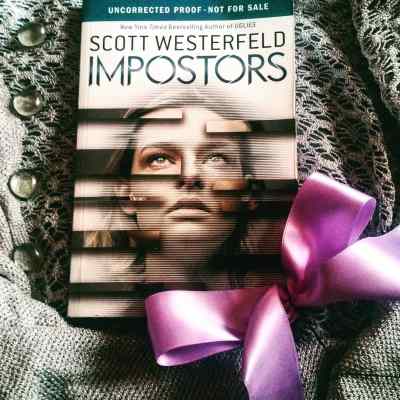 Frey and Rafi are inseparable . . . but very few people have ever seen them together. This is because Frey is Rafi’s double, raised in the shadow’s of their rich father’s fortress. While Rafi has been taught to charm, Frey has been taught to kill. Frey only exists to protect her sister. There is no other part of her life. Frey has never been out in the world on her own – until her father sends her in Rafi’s place to act as collateral for a dangerous deal. Everyone thinks she’s her sister – but Col, the son of a rival leader, is starting to get close enough to tell the difference. As the stakes grow higher and higher, Frey must decide whether she can trust him – or anyone in her life.

Impostors is the first book in a new spin off series set in the same world as the Uglies series by Scott Westerfeld. This book follows Frey, the secret twin sister and body double to Rafia, who is the heir to the first family in charge of the city Shreve. Frey’s father send a her instead of Rafia as a hostage to a rival city as the two cities negotiate a trade deal. Frey continues to impersonate Rafia, but as she gets closer to the rival city’s first son, Col, she fears he might begin to see her for who she truly is.

The plot takes off pretty quickly and remains at a captivating pace through the entire book. There is a lot of action, a romance and some political battles. I found this book to be similar to Uglies, but much more captivating. I only read about half of the first book in that series because I found it moved very slowly. Luckily I think this book was much better.

I really liked Frey as a character. She is strong and not without her issues, as she is unloved by her father. She has a loyalty to her sister and fights for what is right. There’s a bit of romance between her and Col, but it isn’t really a focus of the novel. If you like romance heavy books, then this might not be for you. But if you prefer that a romance doesn’t overshadow the plot, then go ahead and pick this one up.

I will warn you that the way this book ends kind of feels like a cliffhanger. Things are not completely finished in the book. Personally I don’t mind cliffhangers, but I know a lot of people do. Overall I liked this one a lot. The characters were interesting and the plot was fast-paced. It’s a good, quick read set in a futuristic world.

6 thoughts on “Impostors by Scott Westerfeld”