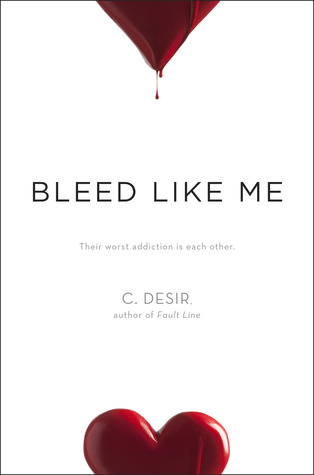 Summary: From the author of Fault Line comes an edgy and heartbreaking novel about two self-destructive teens in a Sid and Nancy-like romance full of passion, chaos, and dyed hair.

Seventeen-year-old Amelia Gannon (just “Gannon” to her friends) is invisible to almost everyone in her life. To her parents, to her teachers-even her best friend, who is more interested in bumming cigarettes than bonding. Some days the only way Gannon knows she is real is by carving bloody lines into the flesh of her stomach.

Then she meets Michael Brooks, and for the first time, she feels like she is being seen to the core of her being. Obnoxious, controlling, damaged, and addictive, he inserts himself into her life until all her scars are exposed. Each moment together is a passionate, painful relief.

But as the relationship deepens, Gannon starts to feel as if she’s standing at the foot of a dam about to burst. She’s given up everything and everyone in her life for him, but somehow nothing is enough for Brooks-until he poses the ultimate test.

Bleed Like Me is a piercing, intimate portrayal of the danger of a love so obsessive it becomes its own biggest threat.

This is a book that gets down to the grit of a very serious issue, self-harm. It is a story that will rip you apart from the inside out.

Gannon has been invisible for the past five years. Her parents adopted three brothers from Guatemala and ever since then, she has fallen into the background. She only has one friend and they pretty much just chain smoke cigarettes together. Gannon escapes from the emotional pain of her life by causing herself physical pain through cutting. But when she meets Brooks everything starts to change. Brooks is interested in her from the very start. He sees her, when to everyone else she is invisible. It isn’t long before she needs him like she needs oxygen to breathe.

I’ve never read such a heart-wrenching and raw book. I probably cried a dozen times reading this. Christa Desir developed two very three dimensional characters in an extremely co-dependent relationship. Through reading you could feel the need that Gannon had for Brooks.

This book took you inside the head of someone who cut themselves. It was easy to understand the pain Gannon went through and how she found relief. When reading about a subject like this you often feel like an outsider looking in, but that is not the case in Bleed Like Me.

3 thoughts on “Bleed Like Me by Christina Desir –Review”