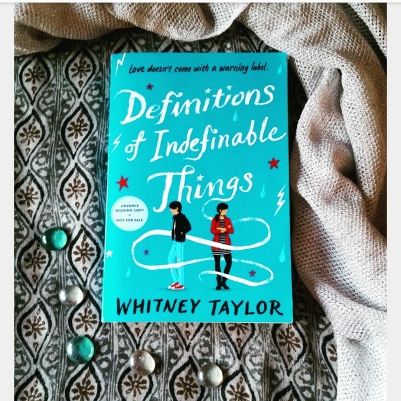 This heartbreaking, humorous novel is about three teens whose lives intersect in ways they never expected.

Reggie Mason is all too familiar with “the Three Stages of Depression.” She believes she’s unlocked the secret to keeping herself safe: Nobody can hurt you if you never let them in.

Reggie encounters an unexpected challenge to her misanthropy: a Twizzler-chomping, indie film-making narcissist named Snake. Snake’s presence, while reassuring, is not exactly stable—especially since his ex-girlfriend is seven months pregnant. As Reggie falls for Snake, she must decide whether it’s time to rewrite the rules that have defined her.

This is a story about two depressed teenagers as they struggle to find happiness and love. Reggie is a depressed teenage girl who meets Snake at a pharmacy while they both pick up their depression meds. These two lonely souls strike up an unlikely romance that is challenged by the fact that a pregnant girlfriend. Filled with betrayal, hopelessness and ultimately love, this story is about two teens struggling to find any meaning in life.

I always like to read books about mental illness because I don’t feel like the general public really understands these types of issues. I feel like depression was shown relatively well in this book, but I also feel like at times it could have been shown better. It is difficult to portray these types of struggles realistically though, because they differ with each individual. I can only hope that this book might bring some awareness to even one person who didn’t understand depression.

The characters were the driving factor in this story. Regime’s character changed a lot through the course of this novel. While I wouldn’t go so far as to say that she overcame her depression, but I think she learns to cope with it. She grows and starts to make friends and tries to find bits of happiness. Her relationship with Snake is actually a healthy one, not a codependent one like you would expect from two people who both struggle with mental illness.

The romance is sweet. It might not have started in the best way, but these two teenagers slowly begin to bring out the best in each other. It is a romance that builds slowly and faces all sorts of struggles. I really enjoyed this novel with its quirky characters and it’s portrayal of depression. This is a cute young adult romance that brings awareness to mental illness.

This review was first published at Romance Junkies.