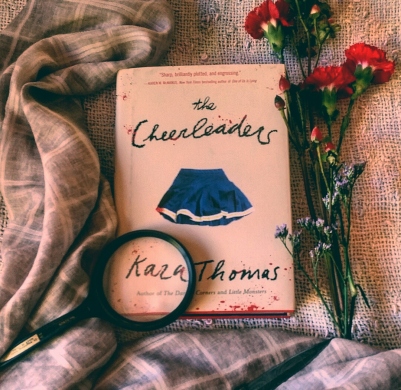 There are no more cheerleaders in the town of Sunnybrook.

First there was the car accident—two girls gone after hitting a tree on a rainy night. Not long after, the murders happened. Those two girls were killed by the man next door. The police shot him, so no one will ever know why he did it. Monica’s sister was the last cheerleader to die. After her suicide, Sunnybrook High disbanded the cheer squad. No one wanted to be reminded of the girls they lost.

That was five years ago. Now the faculty and students at Sunnybrook High want to remember the lost cheerleaders. But for Monica, it’s not that easy. She just wants to forget. Only, Monica’s world is starting to unravel. There are the letters in her stepdad’s desk, an unearthed, years-old cell phone, a strange new friend at school. . . . Whatever happened five years ago isn’t over. Some people in town know more than they’re saying. And somehow Monica is at the center of it all.

There are no more cheerleaders in Sunnybrook, but that doesn’t mean anyone else is safe.

The Cheerleaders was absolutely amazing. It is amazingly plotted, The Cheerleaders is a YA murder mystery novel full of twists and turns. Monica starts asking questions about the 5 cheerleaders who died in 3seprate incidents because one of girls was her sister. Filled with grief, a murder mystery, and high school drama, this book kept me flipping the pages the entire way through.
I found the plot to be full of surprises.There were many twists that I never saw coming. The book kept a captivating pace and never slowed down. I loved that it was so fast and well paced. I tried to guess the murderer several times, but was wrong every time.
I have read several murder mystery novels that deal with cold cases and most of them get boring fast. This book never did, but it also included flashbacks from the time of the murder, which helped add to the story. This reminded me of Veronica Mars and I found that I really enjoyed it. It felt realistic for a teenage detective story, she does things like search photos on Facebook for clues. I loved following the clues step by step, it made me feel like a detective in the same way that One Of Us Is Lying did.
I did find the first chapter of two to be a little rocky. I felt like a lot of names were dropped really fast, but also that it didn’t seem to flow very well. I was almost scared off. After that the book picked up though, and was an awesome read all the way through. I would recommend this to mystery fans, but also to YA lovers.

8 thoughts on “The Cheerleaders by Kara Thomas – Review”