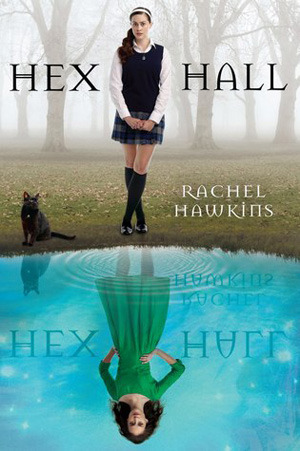 Three years ago, Sophie Mercer discovered that she was a witch. It’s gotten her into a few scrapes. Her non-gifted mother has been as supportive as possible, consulting Sophie’s estranged father—an elusive European warlock—only when necessary. But when Sophie attracts too much human attention for a prom-night spell gone horribly wrong, it’s her dad who decides her punishment: exile to Hex Hall, an isolated reform school for wayward Prodigium, a.k.a. witches, faeries, and shapeshifters.

By the end of her first day among fellow freak-teens, Sophie has quite a scorecard: three powerful enemies who look like supermodels, a futile crush on a gorgeous warlock, a creepy tag-along ghost, and a new roommate who happens to be the most hated person and only vampire student on campus. Worse, Sophie soon learns that a mysterious predator has been attacking students, and her only friend is the number-one suspect.

As a series of blood-curdling mysteries starts to converge, Sophie prepares for the biggest threat of all: an ancient secret society determined to destroy all Prodigium, especially her.

Hex Hall has been on my TBR for ages, but I have not picked it up until now. I have read Rebel Belle, which is also by Rachel Hawkins, (check out my review here) and found the writing to be humorous and entertaining. As I have heard a lot about this series and love books about witches, I figured it was time to pick this one up. I also had just finished a really intricate epic fantasy and was looking for something light hearted and fast paced to read. Hex Hall was the perfect fit to curb a potential reading slump.

I have always loved books set in boarding schools or magical schools and this book did the setting justice. Hecate Hall not only has witches attending, but also fairies, shapeshifters and even one vampire. The school is a sort of reform school for troublesome Prodigium, or magical species, and Sophie is one of the most troublesome of all. She is a bit of an outcast and makes friends with Jenna, her roommate and the only vampire in the school. Their friendship was one of my favorite parts of this book because Jenna was the e most harmless vampire. Jenna loved pink and was really nice, basically the opposite of what you expect a vampire to be. The plot wasn’t super intricate, but the story moved really fast. It only took me a few hours to read this book.

The characters were really the driving force in this novel. They weren’t super complex, or multi-layered, and they didn’t really have me emotionally invested, but they were entertaining. Sophie was funny and sometimes a little morally grey. The trouble she constantly found herself in was endlessly amusing. While this isn’t going to be a title that I would refer to as a favorite of mine, it was wildly entertaining and worth the read.

Of course Rachel Hawkins’ style of humorous writing was present in this novel. The book is filled with witty comebacks and entertaining rivalries. The story never got dull, making it fly by even faster. I am glad that I returned to Rachel Hawkins’ writing because it was really perfect for getting me off the edge of a reading slump. I would like to read the rest of this series along with the Rebel Belle series. They are fast, funny books. I would recommend this book to anyone seeking a humorous, fast paced, young adult paranormal book, but I would also recommend it if you are stuck in a reading rut of if you just need to read something light.