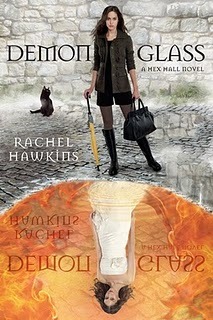 Sophie Mercer thought she was a witch. That was the whole reason she was sent to Hex Hall, a reform school for delinquent Prodigium (a.k.a. witches, shape-shifters, and faeries). But then she discovered the family secret, and the fact that her hot crush, Archer Cross, is an agent for The Eye, a group bent on wiping Prodigium off the face of the earth.

Turns out, Sophie’s a demon, one of only two in the world-the other being her father. What’s worse, she has powers that threaten the lives of everyone she loves. Which is precisely why Sophie decides she must go to London for the Removal, a dangerous procedure that will either destroy her powers for good-or kill her.

But once Sophie arrives, she makes a shocking discovery. Her new housemates? They’re demons too. Meaning, someone is raising demons in secret, with creepy plans to use their powers, and probably not for good. Meanwhile, The Eye is set on hunting Sophie down, and they’re using Archer to do it. But it’s not like she has feelings for him anymore. Does she?

I picked up this sequel because after Hex Hall I tried to read Enchantee and while it is very good, it is so slow paced. So I figured I would return to the series I was just reading and enjoy a fast paced read before returning to Enchantee. Demonglass was a bit different from the first installment in the series because it wasn’t set in Hecate Hall. While I did prefer the setting of the first novel, this one felt more action packed, and of course, the same cast of characters returned.

I love Sophie and her sarcastic banter that is indicative of a protagonist written by Rachel Hawkins. While her friendship with Jenna was one of my favorite parts of the first book, Jenna didn’t play as large of a role in this book. A new love interest entered the scene, as in the last book things with Archer didn’t turn out so well. There was a love triangle with Archer, Cal and Sophie and I have to admit that I am definitely rooting for Cal since I never really liked Archer as a love interest. I actually really like love triangles, although I know a lot of people don’t. There is something about two boys fighting over a girl that I will always find interesting to read. If you are one of those people who hate love triangles, then this series might not be for you, because so far in the series there has been a different love triangle in each book.

As far as the story line goes, I think Demonglass had a lot more to it than the first book did. Hex Hall focused more on introducing us to the world and its characters, while this book focused on the politics of that world and a demon filled plot. Both novels moved very quickly, but Demonglass had more actions and a more complex plot. The twists in it weren’t necessarily unexpected, but they were interesting to watch unfold.

Overall I think Demonglass made for a great sequel. It didn’t really suffer from second-book-syndrome, although I did miss the setting of Hecate Hall, it was a fun, fast read. I would have liked Jenna to play a bigger role and I found a new love interest to root for in Cal. It was light, full of sarcasm and magic and also left me wanting the final book in the trilogy. I really enjoy Rachel Hawkins writing and can’t wait to read more of her books when I am in the mood for something fast paced and full of jokes.

Check out my review of Hex Hall.