I’ve seen a bunch of variations on this idea, but I like this one the most. Plus I love Destiny at Howling Libraries, who created this prompt, check her out, she is amazing. I love reading her posts every week, so I finally decided to join in. I have a ridiculously long TBR and will probably concentrate more on the highs.

As I keep doing this it is getting harder and harder to take books off of my TBR. But I am asking myself if I would really read the book, or if I stumbled across the book today would I add it to my TBR? If the answers are no then I am taking the book off of my list.

The Devil’s Dream by David Beers

While this sounds interesting it is unlikely that I will ever read it.

I am kinda picky on werewolf books. It can be done really well, but it’s kinda become a fad lately. Some of the books are “werewolf” books but they are really just romances because FOR SOME WEIRD REASON the werewolves don’t have to shift and so basically it’s a romance disguised as a werewolf book.

I hate the cover and the blurb really isn’t compelling. I am going to take this one off. I will never read this.

Only 12 reviews and from the blurb I can tell it’s going to make me upset. 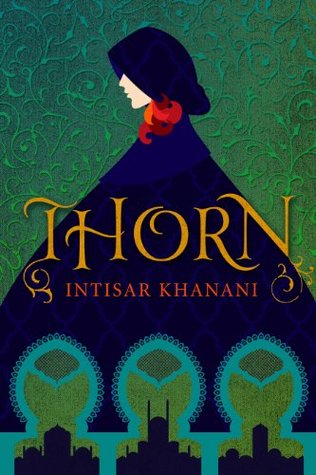 For Princess Alyrra, choice is a luxury she’s never had … until she’s betrayed.

Princess Alyrra has never enjoyed the security or power of her rank. Between her family’s cruelty and the court’s contempt, she has spent her life in the shadows. Forced to marry a powerful foreign prince, Alyrra embarks on a journey to meet her betrothed with little hope for a better future.

But powerful men have powerful enemies–and now, so does Alyrra. Betrayed during a magical attack, her identity is switched with another woman’s, giving Alyrra the first choice she’s ever had: to start a new life for herself or fight for a prince she’s never met. But Alyrra soon finds that Prince Kestrin is not at all what she expected. While walking away will cost Kestrin his life, returning to the court may cost Alyrra her own. As Alyrra is coming to realize, sometime the hardest choice means learning to trust herself.

When looking up fairy tale re-tellings for this post I stumbled across this book. It is a re-telling of Goose Girl. It’s actually not currently available and will be re-released in Winter 2020. 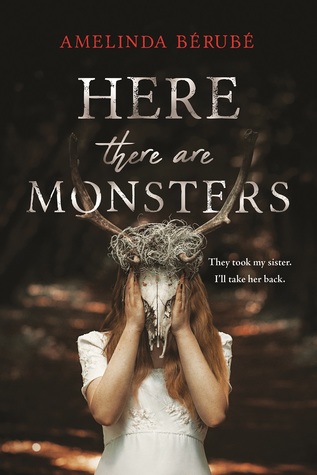 Here There Are Monsters by Amelinda Bérubé

The Blair Witch Project meets Imaginary Girls in this story of codependent sisterhood, the struggle to claim one’s own space, and the power of secrets

Sixteen-year-old Skye is done playing the knight in shining armor for her insufferable younger sister, Deirdre. Moving across the country seems like the perfect chance to start over.

In their isolated new neighborhood, Skye manages to fit in, but Deirdre withdraws from everyone, becoming fixated on the swampy woods behind their house and building monstrous sculptures out of sticks and bones.

And when something awful comes scratching at Skye’s window in the middle of the night, claiming she’s the only one who can save Deirdre, Skye knows she will stop at nothing to bring her sister home.

The cover and the comparison to The Blair Witch Project drew me in to this strange book. I requested a copy on Netgalley, I’m hopeful that I might get to check out this one. 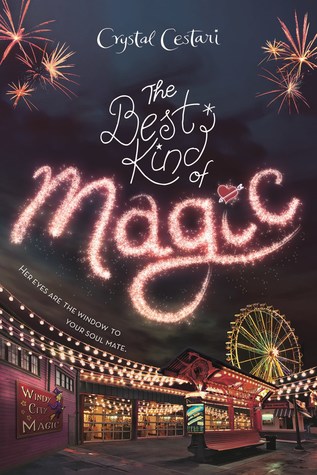 The Best Kind of Magic by Crystal Cestari

Amber Sand is not a witch. The Sand family Wicca gene somehow leapfrogged over her. But she did get one highly specific magical talent: she can see true love. As a matchmaker, Amber’s pretty far down the sorcery food chain (even birthday party magicians rank higher), but after five seconds of eye contact, she can envision anyone’s soul mate.

Amber works at her mother’s magic shop–Windy City Magic–in downtown Chicago, and she’s confident she’s seen every kind of happy ending there is: except for one–her own. (The Fates are tricky jerks that way.) So when Charlie Blitzman, the mayor’s son and most-desired boy in school, comes to her for help finding his father’s missing girlfriend, she’s distressed to find herself falling for him. Because while she can’t see her own match, she can see his–and it’s not Amber. How can she, an honest peddler of true love, pursue a boy she knows full well isn’t her match?

The Best Kind of Magic is set in urban Chicago and will appeal to readers who long for magic in the real world. With a sharp-witted and sassy heroine, a quirky cast of mystical beings, and a heady dose of adventure, this novel will have you laughing out loud and questioning your belief in happy endings.

I saw a photo of this on Instagram and loved the cover. I went to go check  out the blurb on Goodreads and instantly knew that I wanted to read it. Plus it is set in urban Chicago! 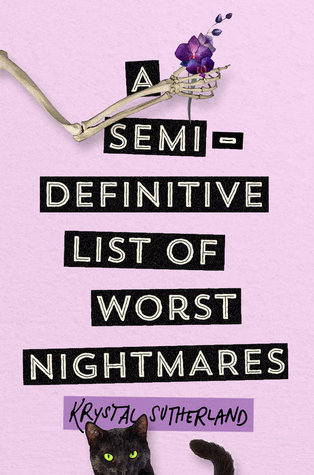 A Semi-Definitive List of Worst Nightmares by Krystal Sutherland

Ever since Esther Solar’s grandfather met Death, her entire family has been doomed to suffer one great fear in their lifetime—a fear that will eventually lead each and every one of them to their graves. Take Esther’s father, for instance: He’s an agoraphobe who hasn’t left the basement in six years. Then there’s her twin brother, Eugene, whose fear of the dark goes far beyond the things that go bump in the night. And her mother, Rosemary, is absolutely terrified of bad luck.

As for Esther, she’s managed to escape the curse…so far. She doesn’t yet have a great fear because she avoids pretty much everything. Elevators, small spaces, crowds—anything that might trigger a phobia is off-limits and is meticulously recorded in her semi-definitive list of worst nightmares.

Esther thinks she has it all figured out, until she’s reunited with an old elementary school classmate—and first crush—Jonah Smallwood. The encounter leaves her stranded at a bus stop and swindled out of her phone, all her cash, a Fruit Roll-Up she’d been saving, and her list—not to mention her dignity. But the theft is also the beginning of an unexpected friendship between the two, one that sends the pair on a journey of self-discovery as they try to break the curse that’s consumed Esther’s family. Together they face their greatest fears, one debilitating phobia at a time, only to discover the one fear they hadn’t counted on: love. 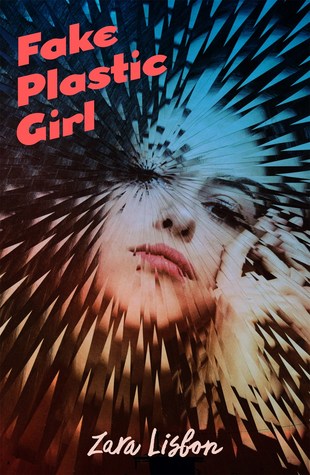 Celebrity-studded parties that last long into the night. Camera flashes and designer clothes. And a body found floating in the Venice Beach canals.

But let’s start at the beginning.

Justine Childs is your average teenage girl, until the day ex-child-star Eva Kate Kelly moves in across the way. Eva Kate is gorgeous, seductive, and eager to invite Justine into her glittery world. Their relationship intensifies quickly, but there is a lot they aren’t telling each other, and in the midst of the whirlwind, a girl lies dead. Who killed Eva Kate? Justine swears her innocence—and she’d like you to hear her side of the story.

I entered into a Goodreads giveaway for this book. Sadly I didn’t win, but I still want to check it out!

Have you read any of these books? Do certain covers turn you away from books? Are you picky about adding titles to your TBR or do you add everything like me? Did you also do a TBR purging recently? Link it below! Comment below and we can talk about our never ending to be read piles.