The upcoming schedule is:

I haven’t read a ton of books about dragons, but I have always wanted to! I have a whole bunch of books that have dragons in them on my TBR list. I did read and watch Game of Thrones, so that is where I started to love dragons. Even though dragons showed up  in Harry Potter, I feel like I didn’t fall in love with them until Game of Thrones. I also recently read The Bone Ships which was about a sea dragon and The Black Witch which had a dragon in it as well. I feel like they used to be in fairy tales and then they weren’t in stories for a long time, but I feel like recently they’ve started to get popular again! Maybe because of Game of Thrones. I am very excited to share these titles with you, and once again I struggled to get this list down to only 5 books.

Annie and Lee were just children when a brutal revolution changed their world, giving everyone—even the lowborn—a chance to test into the governing class of dragonriders.

Now they are both rising stars in the new regime, despite backgrounds that couldn’t be more different. Annie’s lowborn family was executed by dragonfire, while Lee’s aristocratic family was murdered by revolutionaries. Growing up in the same orphanage forged their friendship, and seven years of training have made them rivals for the top position in the dragonriding fleet.

But everything changes when survivors from the old regime surface, bent on reclaiming the city.

With war on the horizon and his relationship with Annie changing fast, Lee must choose to kill the only family he has left or to betray everything he’s come to believe in. And Annie must decide whether to protect the boy she loves . . . or step up to be the champion her city needs.

From debut author Rosaria Munda comes a gripping adventure that calls into question which matters most: the family you were born into, or the one you’ve chosen.

I really wanted an ARC of this, but got denied for an eARC. I mentioned online that Fireborne was one of the titles that I really wanted to read and someone mailed me a copy! I am very excited to read this one! I can’t believe I wound up with a copy!

A forest, besieged. A queen, unyielding. Fans of Leigh Bardugo and Holly Black will devour this deliciously dark Eastern European–inspired YA fantasy debut.

When the Golden Dragon descended on the forest of Kamiena, a horde of monsters followed in its wake.

Ren, the forest’s young queen, is slowly losing her battle against them. Until she rescues Lukasz—the last survivor of a heroic regiment of dragon slayers—and they strike a deal. She will help him find his brother, who vanished into her forest… if Lukasz promises to slay the Dragon.

But promises are all too easily broken.

This is a 2020 ARC that I have and I’m pretty excited for it! It’s a debut novel so I hope that I enjoy it and get to discover a new author. It’s supposed to be dark and has Eastern European influences, so I really can’t wait to get to this one! Unfortunately I will have to wait to read it for a while!

The Priory of the Orange Tree by Samantha Shannon

A world divided.
A queendom without an heir.
An ancient enemy awakens.

The House of Berethnet has ruled Inys for a thousand years. Still unwed, Queen Sabran the Ninth must conceive a daughter to protect her realm from destruction—but assassins are getting closer to her door.

Ead Duryan is an outsider at court. Though she has risen to the position of lady-in-waiting, she is loyal to a hidden society of mages. Ead keeps a watchful eye on Sabran, secretly protecting her with forbidden magic.

Across the dark sea, Tané has trained all her life to be a dragonrider, but is forced to make a choice that could see her life unravel.

Meanwhile, the divided East and West refuse to parley, and forces of chaos are rising from their sleep.

When this came out everyone I know was raving about it. I am a bit intimidated by it’s length, but I really want to read it. I love long fantasy novels when I actually read them. Despite how intimidated I am by this book I really want to read it. It’s been a long time since I read the Song of Ice and Fire series, and I just really loved having a super long fantasy with dragons in it. 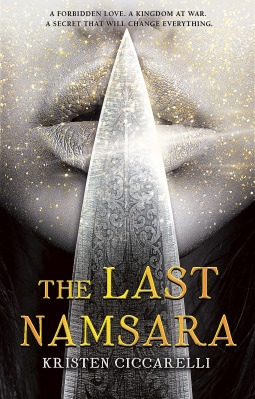 The Last Namsara by Kristen Ciccarelli

In the beginning, there was the Namsara: the child of sky and spirit, who carried love and laughter wherever he went. But where there is light, there must be darkness—and so there was also the Iskari. The child of blood and moonlight. The destroyer. The death-bringer.

These are the legends that Asha, daughter of the king of Firgaard, has grown up learning in hushed whispers, drawn to the forbidden figures of the past. But it isn’t until she becomes the fiercest, most feared dragon slayer in the land that she takes on the role of the next Iskari—a lonely destiny that leaves her feeling more like a weapon than a girl.

Asha conquers each dragon and brings its head to the king, but no kill can free her from the shackles that await at home: her betrothal to the cruel commandant, a man who holds the truth about her nature in his palm. When she’s offered the chance to gain her freedom in exchange for the life of the most powerful dragon in Firgaard, she finds that there may be more truth to the ancient stories than she ever could have expected. With the help of a secret friend—a slave boy from her betrothed’s household—Asha must shed the layers of her Iskari bondage and open her heart to love, light, and a truth that has been kept from her.

This book looks absolutely incredible. A fierce female main character who is also a princess, dragons and a betrothal to someone she doesn’t want to marry. This book has flown a bit under the radar, but once again it’s one I’ve heard nothing but good things about.

One boy…
One dragon…
A world of adventure.

When Eragon finds a polished blue stone in the forest, he thinks it is the lucky discovery of a poor farm boy; perhaps it will buy his family meat for the winter. But when the stone brings a dragon hatchling, Eragon soon realizes he has stumbled upon a legacy nearly as old as the Empire itself.

Overnight his simple life is shattered, and he is thrust into a perilous new world of destiny, magic, and power. With only an ancient sword and tge advice of an old storyteller for guidance, Eragon and the fledgling dragon must navigate the dangerous terrain and dark enemies of an Empire ruled by a king whose evil knows no bounds.

Can Eragon take up the mantle of the legendary Dragon Riders? The fate of the Empire may rest in his hands.

I have had a copy of this book forever, but have never read it. When someone in my real life recommended I finally read it, this book got moved up my TBR. I think the only reason that I never read it is that I bought my copy when I was too young to read it. I think it may finally be time to read this one because it sounds really magical.

Jolie @ Read With Me — Check out her post linked below!