Can’t Wait Wednesday is a weekly meme hosted by Wishful Endings based on the meme Waiting on Wednesday by Breaking the Spine. In this weekly post people share a book that they’re excited about being released.

I have always loved reading these posts, looking forward at books that people can’t wait for. But I always find that I want a list and it is just one book. So I decided I would share three books that I can’t wait for. If you click on the title of the book it will take you to the book’s Goodreads page 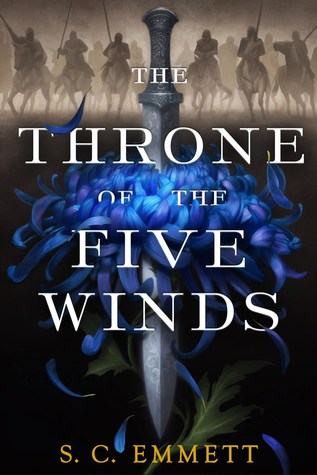 The Throne of Five Winds by S.C. Emmett

The Emperor’s palace — full of ambitious royals, sly gossip, and unforeseen perils — is perhaps the most dangerous place in Zhaon. A hostage for her conquered people’s good behavior, the lady Komor Yala has only her wits and her hidden maiden’s blade to protect herself — and her childhood friend Princess Mahara, sacrificed in marriage to the enemy to secure a tenuous peace.

But the Emperor is aging, and the Khir princess and her lady-in-waiting soon find themselves pawns in the six princes’ deadly schemes for the throne — and a single spark could ignite fresh rebellion in Khir.

And then, the Emperor falls ill, and a far bloodier game begins…

The Throne of the Five Winds is the first installment of the Hostage of Empire series, an intricate and ruthless East Asia-inspired epic fantasy trilogy perfect for fans of George R. R. Martin, Ken Liu, Kate Elliott, and K. Arsenault Rivera.

This is one of the titles that I requested from Orbit when they first added me to their blogger list. Royals, gossip and rebellion in a fantasy novel? I mean what more can you ask for? I am so excited to read this one. I really can’t wait because I feel like Orbit NEVER lets me down!

In the Hall with the Knife by Diana Peterfreund

A murderer could be around every corner in this thrilling YA trilogy based on the board game CLUE!

When a storm strikes at Blackbrook Academy, an elite prep school nestled in the woods of Maine, a motley crew of students—including Beth “Peacock” Picach, Orchid McKee, Vaughn Green, Sam “Mustard” Maestor, Finn Plum, and Scarlet Mistry—are left stranded on campus with their headmaster. Hours later, his body is found in the conservatory and it’s very clear his death was no accident. With this group of students who are all hiding something, nothing is as it seems, and everyone has a motive for murder. Fans of the CLUE board game and cult classic film will delight in Diana Peterfreund’s modern reimagining of the brand, its characters, and the dark, magnificent old mansion with secrets hidden within its walls.

I picked up an ARC of this book based on the recommendation from Susan @ Novel Lives. I just started it and I’m already loving it. It is a clue retelling, but it is set at a BOARDING SCHOOL! Which you all know is something that I am obsessed with. I just started reading it and it feels like it’s going to be a very quick and fun read. I love the writing and am already absorbed.

Queen of the Conquered by Kacen Callender

An ambitious young woman with the power to control minds seeks vengeance against the royals who murdered her family, in a Caribbean-inspired fantasy world embattled by colonial oppression.

Sigourney Rose is the only surviving daughter of a noble lineage on the islands of Hans Lollik. When she was a child, her family was murdered by the islands’ colonizers, who have massacred and enslaved generations of her people—and now, Sigourney is ready to exact her revenge.

When the childless king of the islands declares that he will choose his successor from amongst eligible noble families, Sigourney uses her ability to read and control minds to manipulate her way onto the royal island and into the ranks of the ruling colonizers. But when she arrives, prepared to fight for control of all the islands, Sigourney finds herself the target of a dangerous, unknown magic.

Someone is killing off the ruling families to clear a path to the throne. As the bodies pile up and all eyes regard her with suspicion, Sigourney must find allies among her prey and the murderer among her peers… lest she become the next victim.

Queen of the Conquered reckons with the many layers of power and privilege in a lush fantasy world—perfect for readers of V. E. Schwab, Kiersten White, and Marlon James.

Since I mentioned books I got from Orbit earlier I thought I might as well bring up the only other title I got from them that I haven’t mentioned yet on my blog. I wasn’t able to get a physical ARC of this one, but I did get an eARC. I love cultural fantasies, but add royalty, murder, vengeance and mind control? I am having a hard time waiting until closer to publication to read this one.

Are you looking forward to any of these titles?  What upcoming books are high on your wish list? Are there any upcoming sequels you are dying to get your hands on? Have you heard of these titles? Did my post make you add of these books to your TBR? Make sure to comment below so we can chat about the books you can’t wait for!