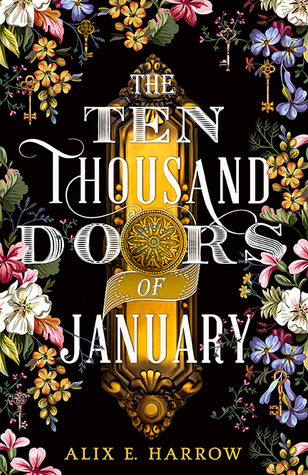 In the early 1900s, a young woman embarks on a fantastical journey of self-discovery after finding a mysterious book in this captivating and lyrical debut.

In a sprawling mansion filled with peculiar treasures, January Scaller is a curiosity herself. As the ward of the wealthy Mr. Locke, she feels little different from the artifacts that decorate the halls: carefully maintained, largely ignored, and utterly out of place.

Then she finds a strange book. A book that carries the scent of other worlds, and tells a tale of secret doors, of love, adventure and danger. Each page turn reveals impossible truths about the world and January discovers a story increasingly entwined with her own.

Lush and richly imagined, a tale of impossible journeys, unforgettable love, and the enduring power of stories awaits in Alix E. Harrow’s spellbinding debut–step inside and discover its magic.

I was a little apprehensive about this title because it’s been getting a lot of hype, but also since it is a portal fantasy I assumed that it would require a lot of world building for all of the different worlds. While the story didn’t travel to the many worlds that I expected it to and wanted it to, I still wound up absolutely loving this story. Right away I liked the way it was written. The story is told in first person from January’s point of view as she recounted events to the reader. While sometimes I feel like acknowledging the reader isn’t a great choice, in this story it was the perfect one.

The thing that I loved the most about The Ten Thousand Doors of January was that it felt entirely real to me. This story truly came to life for me and I could almost believe that it was true. In the story January finds a book titled The Ten Thousand Doors, which is partially a scholarly investigation into Doors that are portals to other worlds, and partially a story of two lovers traveling through Doors in attempts to find one another. The inclusion of The Ten Thousand Doors within this book added immensely to the world building, but also made the possibility of Doors feel incredibly real. I haven’t read a ton of magical realism titles, but after this one I really want to read more books in that genre because the fact that Doors felt so real made me love this book even more.

While I did hope for the plot to take me to many different worlds like Valhalla and Atlantis, and I was worried that there wouldn’t be good enough world building this book had me completely absorbed. While the story didn’t travel to lots of different worlds, the world building was still fantastic. Even though I had different hopes for the plot I absolutely loved where this book wound up going. While none of the plot twists really caught me off guard, I also couldn’t predict where the story was going to take me next. It was a magical journey that really pulled at my heart strings, but also showed me what it was like for darker skinned people in America in the early 1900’s.

Each one of the characters in this story was written well. In the beginning of the story when January got a dog who became her best friend I knew I was going to cherish this book. January wound up with friends who were fiercely loyal to her and couldn’t believe that people would want to be her friend and that they wouldn’t abandon her. She was easy to relate to even though I am quite different from her because the first person point of view conveyed her personality and thoughts very well. Even the villain of the story was multi-layered and interesting. I would love a spin off story about Jane though, because I really wanted to know so much more about her life. I would honestly love a spin off story about any one of the worlds that the Doors lead to.

I tried to reign in my expectations for this book, but there was really no need because it was beautiful and magical. This fierce story of hope, friendship and family was so well written and is one that I absolutely cherished. I am so grateful that I received an ARC and highly recommend that everyone gives this book the chance it deserves. I was surprised to find out that The Ten Thousand Doors of January was Alix E Harrow’s debut novel and am excited to check out her next book which has been pitched as “suffragists, but witches” and is set in an 1890’s alternate America where they fight to restore women’s magic. The idea sounds amazing and I can’t wait to read more books by Alix E Harrow.