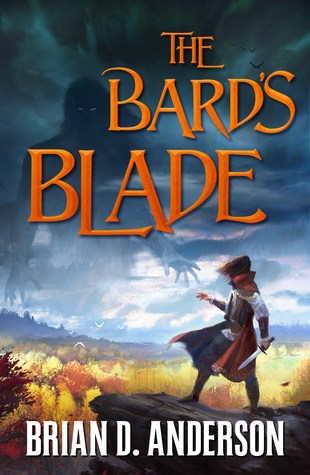 The start of a new fantasy adventure from Brian D. Anderson, bestselling author of The Godling Chronicles and Dragonvein series.

Mariyah enjoys a simple life in Vylari, a land magically sealed off from the outside world, where fear and hatred are all but unknown. There she’s a renowned wine maker and her betrothed, Lem, is a musician of rare talent. Their destiny has never been in question. Whatever life brings, they will face it together.

But destiny has a way of choosing its own path, and when a stranger crosses the wards into Vylari for the first time in centuries, the two are faced with a terrible prophecy. For beyond the borders, an ancient evil is returning, its age-old prison shattered.

This is the kind of fantasy novel that I spend ages searching for. I picked up a review copy of this book on a whim and I had no idea that I was going to wind up loving it so much. Right away I knew that I loved the writing and the characters found a place in my heart. This quest fantasy was character driven, yet it never lost my attention. Brian D Anderson’s writing is truly incredible and I’m thrilled to find out that he has written other books, but even more excited that this will be a series. I need the next installment as soon as possible because I am left reeling from the ending.

The characters were done so well and they grew so much throughout the novel. Lem grew fearless and determined and Mariyah grew confident and strong. I loved following each of their journeys and found myself so attached to these characters. Lem and Mariyah were both willing to go to any length for the other and they even tested their own limits doing so. The Bard’s Blade was an emotional ride, I found myself wanting to shake Lem quite often and I was so angry at each injustice that either of them faced. These characters will not leave me anytime soon and I am so grateful that I just so happened to stumble across a book that has quickly become a favorite.

The plot was character driven but was also completely engrossing. The world was built so well and the political system was full of injustices. Lem and Mariyah’s journeys took them all across this world that they had stumbled into and everything possible seemed to go wrong. It was not a predictable story, just when I thought things were finally going to work out the story would take another turn. I had a hard time setting it down, not because it was full of action, but because I loved every moment of this book. There was the classic fight of good versus evil, religious zealots, a group of traveling musicians and even assassins, The Bard’s Blade was everything I could have wanted it to be and so much more.

I can not recommend this book enough. I am already anxious to get my hands on more of Brian D. Anderson’s books because I know good writing when I read it and he is an author that knows how to tell a good story. While this is Brian D. Anderson’s first debut in traditional publishing he has many self published books which I am dying to check out. This book has found a place in my heart and I am eager for the sequel already. The Bard’s Blade was a captivating start to a magical new series.