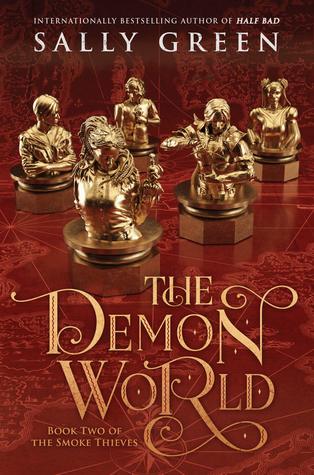 The epic, magical saga of royalty, romance, and violence continues.

A princess. A soldier. A servant. A demon hunter. A thief. When we last saw them, this unlikely group was heading into the Northern Territory of the kingdom of Pitoria, on the run from the sadistic and power-hungry King Aloysius of Brigant. The Smoke Thieves have discovered that demon smoke is not only an illegal drug used for pleasure, but in fact, when taken by children, demon smoke briefly gives its users super-human strength. Aloysius’ plan is simple and brutal: kill the demons for their smoke, and use that smoke to build an unstoppable army of children to take over Pitoria, Calidor, and then the rest of the world. The Smoke Thieves are the only ones who understand this plan—but can they stop it? Catherine, Aloysius’ daughter, is seen as a traitor from all sides; Tash is heartbroken after the loss of her one friend and sees nothing left for her in the human world; Edyon is wanted for murder; March is carrying the secret of his betrayal of his new love; Ambrose is out for revenge–and all the while, the demons have plans of their own…

I absolutely loved The Smoke Thieves by Sally Green, which is the previous book in this series. The book ended in a way where I really needed to pick up the second book right away and I was super excited for it. While I did really like The Demon World, I didn’t love it as much as I had loved the previous installment. I did really enjoy reading the book and tore through it in under two days. I am hooked on this series and can’t wait for book three already.

I absolutely love these characters. I am emotionally invested in their journeys and I love following their stories. In the previous book Tash was my favorite character, and while I still love her I think that her role in this book wasn’t as interesting. Instead I really found myself favoring Edyon’s chapters, he is just so entertaining to read about and I love his personality. I do think that The Demon World focused more on romance than The Smoke Thieves did. While I don’t love reading about romance, the two romances in this book were my favorite kinds of romances. Edyon and March’s romance is an enemies to lovers romance and Ambrose and Catherine’s romance is a forbidden lovers romance with a love triangle on top of it. I love Edyon and March’s romance, but I am actually rooting for Tzsayn and Catherine rather than Ambrose and Catherine.

The plotting is a bit different in this book than the previous installment. Where in the previous installment the plot lines started all separate and then finally converged at the end, where in this book the plot lines and characters started out together and then separated only to come back together. It wasn’t as exciting as the first book was, but it was still fun to follow the different plot lines that were going on. While I liked the set up of the first book better, I liked the plot of this book better. This book really got down to the root of the problem that Brigantine was fighting for and when I learned the truth as a reader I was amazed at how it all came together. I think the climax of this book was done better than book one as well. While both books left me needing the next installment I feel like the ending of book two hit stronger, but I felt like book one was a stronger book overall.

Overall I think that The Demon World was a strong sequel to The Smoke Thieves, even if it wasn’t quite as good. I think this installment focused more on romances, and I actually enjoyed them more than I normally enjoy romances, but I think a large part of that is because I love these characters. The plot lines were set up a bit different than the previous book, but I still love how the multiple POVs follow different story lines until they converge. The ending of this book really rocked my world and I am so excited for book three to come out. I would highly recommend this series to all of my friends. This is one you don’t want to miss.

Check out my review of The Smoke Thieves (book one) here!

3 thoughts on “The Demon World by Sally Green”