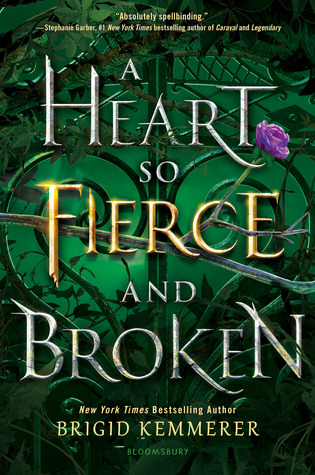 Find the heir, win the crown.

The curse is finally broken, but Prince Rhen of Emberfall faces darker troubles still. Rumors circulate that he is not the true heir and that forbidden magic has been unleashed in Emberfall. Although Rhen has Harper by his side, his guardsman Grey is missing, leaving more questions than answers.

Win the crown, save the kingdom.

Rumored to be the heir, Grey has been on the run since he destroyed Lilith. He has no desire to challenge Rhen–until Karis Luran once again threatens to take Emberfall by force. Her own daughter Lia Mara sees the flaws in her mother’s violent plan, but can she convince Grey to stand against Rhen, even for the good of Emberfall?

The heart-pounding, compulsively readable saga continues as loyalties are tested and new love blooms in a kingdom on the brink of war.

In the sequel to New York Times bestselling A Curse So Dark and Lonely, Brigid Kemmerer returns to the world of Emberfall in a lush fantasy where friends become foes and love blooms in the darkest of places.

There is a reason that there is so much hype for this series, these books are truly incredible. A Heart So Fierce and Broken is one of those rare sequels that is actually just as good, if not better than, the first book. I did not know that this installment would focus on different characters, but I think that it was completely the right choice for the series. While Rhen and Harper are in this book, the story focuses on Grey and Lia Mara, who is the second born princess from an enemy kingdom.

Grey was one of my favorite characters in A Curse So Dark and Lonely, so I was thrilled that this story revolved around him. I also really liked Lia Mara, who was a new character in this installment. Their slow burn romance took a backseat to the plot and was done very well. The two characters grow close slowly, which helped their relationship feel authentic. Grey remained an honorable man, but he wasn’t perfect. He made some pretty big mistakes which helped make him feel human. Lia Mara was bold and held to her morals despite her brutal family and country. I really liked both of them, but I do wish that there were a few more lighter moments between the two of them to help enhance their relationship and make this installment a bit more fun to read.

The plot was fantastic. There was just so much that happened in this book, yet it never felt rushed and it never dragged either. This plot was so captivating and was not what I had expected at all. Brigid Kemmerer does a fantastic job getting the reader invested in the characters and the plot. I loved the adventure that all the characters went on and I became so invested in the fate of both Emberfall and Syhl Shallow. I am so thrilled to read the third book where everything will come to a head with the characters from both the first and second book. I can’t get my hands on it soon enough!

I am so glad that I wound up giving this series a chance. I was pretty hesitant to pick up A Curse So Dark and Lonely because it’s a Beauty and the Beast re-telling, which is a story that revolves around romance. But these books are so much more than just love stories. They are fantasy books with compelling plots, amazing characters and a dash of romance. I’m dying for book three because the way this book ended I can tell that the next installment will be thrilling.

Check out my review of A Curse So Dark and Lonely here!