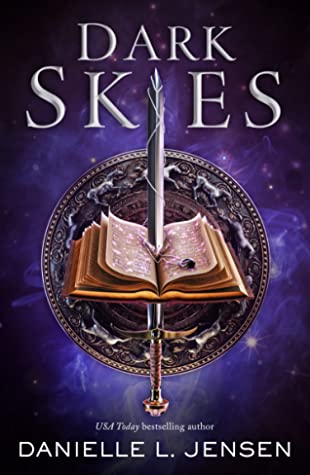 A RUNAWAY WITH A HIDDEN PAST
Lydia is a scholar, but books are her downfall when she meddles in the plots of the most powerful man in the Celendor Empire. Her life in danger, she flees west to the far side of the Endless Seas and finds herself entangled in a foreign war where her burgeoning powers are sought by both sides.

A COMMANDER IN DISGRACE
Killian is Marked by the God of War, but his gifts fail him when the realm under the dominion of the Corrupter invades Mudamora. Disgraced, he swears his sword to the kingdom’s only hope: the crown princess. But the choice sees him caught up in a web of political intrigue that will put his oath – and his heart – to the test.

A KINGDOM UNDER SIEGE
With Mudamora falling beneath the armies of the Corrupter, Lydia and Killian strike a bargain to save those they love most—but it is a bargain with unintended and disastrous consequences. Truths are revealed, birthrights claimed, and loyalties questioned—all while a menace deadlier and more far-reaching than they realize sweeps across the world.

This series truly is incredible. After reading Dark Shores I was thrilled that I already had a review copy of Dark Skies so I could continue this series right away. I was not aware that Dark Skies was not necessarily a sequel before starting it. The events in Dark Skies occur at the same time as Dark Shores and the book focuses on Lydia and Killian rather than Teriana and Marcus, who were the main characters in Dark Shores. Either book can be a starting point for the series and in the third book the story lines will converge. The only other series that I’ve read with a similar format is A Curse So Dark and Lonely and I really love this type of design for a series, where each book focuses on a different couple.

Since both books start at the same time I felt like I was re-reading the beginning of Dark Shores, only through Lydia’s point of view. So it took me a bit to really get interested in this book. I actually set the book aside and almost decided not to read it, but I saw all the positive book reviews and decided to try again. (You can check out other books I want to give a second chance here.) Once the book started to go in its own direction I quickly found myself invested. I actually think I enjoyed this book more than I enjoyed Dark Shores! This installment was a bit less of a political fantasy and really expanded upon the world building, which was really cool. The gods worshiped in the West were explored a lot more, along with the people those gods marked and bestowed with magical gifts. The seventh god, the Corrupter, was a huge part of this story and I really found the whole world fascinating. There was also a blight that infected plants, animals and people and the descriptions of the blight were so vivid and horrifying.

I also really loved Lydia. She was not as fierce as Teriana, but her vulnerabilities, especially her emotional ones, made her easy to connect with. Both Killian and Lydia were so incredibly self-less and truly put the people of Mudamora first. I absolutely loved Lydia. She was loyal and kind and she really got to my heart in a way that Teriana didn’t. I had a lot of mixed feelings about Malahi, the princess of Mudamora, because at times she truly seemed to care for her people, but  at other times she could be so petty and childish. Each character had so much depth to them and they all had distinct personalities. I just really loved these characters and I felt like the themes of honor, selflessness and morality were all explored in depth.

I can’t believe that I almost gave up on this book! It was pretty freaking great and I am glad I gave it a second chance and didn’t miss out on Lydia and Killian’s story. I really loved how this book expanded upon the world built in Dark Shores and I couldn’t get enough of this book. It was hard to me to set this book down as the action hardly ever stopped and the whole thing was incredibly well done. I’m already impatient for the next book to come out and highly recommend checking out this series now if you haven’t read it next.