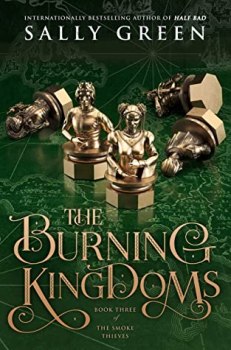 The heart-pounding conclusion to the daring Smoke Thieves trilogy.

In this conclusion to the epic Smoke Thieves trilogy, the world has erupted into all-out war. King Aloysius is mining powerful demon smoke and using it to fuel an unstoppable army of children. March, now banished for treason, has joined up with this boy army. Forbidden from ever seeing Edyon again, and overwhelmed by his own betrayal, March no longer cares if he lives or dies.

Catherine–now queen of Pitoria–must find a way to defeat the boy army, while also grappling with her own troubles: her secret demon smoke addiction, and unresolved tension with her former lover, Ambrose. Catherine seeks military support from Calidor by reaching out to her illegitimate cousin Edyon, who has been proclaimed heir to the Calidorian throne. But Edyon has almost no power as he’s entangled in the unfamiliar machinations and manipulations of the royal court, finding that being the claimed son of a prince may be no easier than being a bastard.

With Catherine, his love, now married off and moving on, and his brother and sister tortured and executed before him, Ambrose doesn’t know what his role in this world is any more. He leads an expedition into the demon world, hoping to destroy the boy army’s stores of demon smoke. In this underground world, he runs into Tash, whom everyone had believed dead. She has survived in this new world using magical abilities that, prior to now, only demons had.

Aloysius will send his demon smoke-powered boy army to kill them all, if he can. But what nobody knows is that there is more to the smoke than meets the eye…

I was really excited to get a review copy of The Burning Kingdoms, which is the conclusion to The Smoke Thieves trilogy. I really love this series and I feel like it is a great example of how multiple points of view and plot lines can be done really well. In each book in the series every character’s POV has its own plot line and they all converge to create a stunning finale in each book. When I first got a copy of The Burning Kingdom I was a little worried that I wouldn’t remember all the previous events of the series, but Sally Green did a decent job reminding the reader of what happened without completely rehashing everything.

I think the characters really help make this series strong. While I still love Tash’s character the most, I found myself most invested in Edyon’s and March’s chapters. I was rooting for their romance, but their plot lines were also extremely interesting. March joined the boy’s brigade, so we got to see the Brigant enemy side along with Catherine’s cruel younger brother Prince Harold. Edyon’s chapters were interesting as he was reunited with his father and legitimized as a prince. The legitimization really effected him because he had always suffered growing up from the fact that he was a bastard. I felt like Ambrose wasn’t as important in this installment and his character kind of fell to the background. As usual I still didn’t really care for Catherine’s chapters that much. The five points of view were balanced pretty well and I was able to keep up with everything that was happening really easily.

The Burning Kingdoms was really fast paced and pretty exciting. There wasn’t a whole lot of filler chapters, so the action hardly ever stopped. The plot went in directions that I never really expected, but I wasn’t happy with all of the final outcomes. But I really think that this concluding book lived up to my expectations and it was a lot of fun to read. It was hard to see the story end because I really loved most of the characters, but I did feel satisfied with the way the series ended.

It is a bit of a bittersweet ending. I feel like most of the characters got the ending that they deserved, but it’s also hard to say goodbye to this series. The plot and pacing were both pretty great, making The Burning Kingdoms a fast and entertaining read. If you enjoy quick YA fantasy with multiple plot lines I would highly recommend reading The Smoke Thieves series.

Check out my review for The Smoke Thieves and The Demon World!

6 thoughts on “The Burning Kingdoms by Sally Green — ARC Review”