This was probably the hardest topic for me to narrow down to only 5 books. I find myself intimidated by SO many books. Either because they have an amazing reputation and I feel that I will be disappointed, or because they are long and intricate, and I don’t want to spend that much time reading a book unless it really is incredible. A lot of books that intimidate me wind up becoming favorites when I finally actually read them. I would love to hear how you get over being intimidated by a book and actually pick it up! The books that intimidate me wind up sitting on my shelf for far too long because I’m scared they’ll disappoint or I won’t be able to get into them. The 5 books listed below are the top 5 books that intimidate me that are at the top of my TBR.

The Way of Kings by Brandon Sanderson

According to mythology mankind used to live in The Tranquiline Halls. Heaven. But then the Voidbringers assaulted and captured heaven, casting out God and men. Men took root on Roshar, the world of storms. And the Voidbringers followed . . .

Or so the legends say. Today, the only remnants of those supposed battles are the Shardblades, the possession of which makes a man nearly invincible on the battlefield. The entire world is at war with itself – and has been for centuries since the Radiants turned against mankind. Kings strive to win more Shardblades, each secretly wishing to be the one who will finally unite all of mankind under a single throne.

On a world scoured down to the rock by terrifying hurricanes that blow through every few day a young spearman forced into the army of a Shardbearer, led to war against an enemy he doesn’t understand and doesn’t really want to fight.

What happened deep in mankind’s past?

Why did the Radiants turn against mankind, and what happened to the magic they used to wield?

I’ve wanted to read more Brandon Sanderson since I finished the Mistborn series last summer. I absolutely loved Mistborn and Brandon Sanderson’s writing is absolutely incredible. But The Stormlight Archive series is going to be a 10 book series and the first book is over a thousand pages. If this book doesn’t intimidate you, I don’t know what does!

Sam Sykes returns with a new fantasy that introduces to an unforgettable outcast magician caught between two warring empires.

Among humans, none have power like mages. And among mages, none have will like Sal the Cacophony. Once revered, now vagrant, she walks a wasteland scarred by generations of magical warfare. The Scar, a land torn between powerful empires, is where rogue mages go to disappear, disgraced soldiers go to die and Sal went with a blade, a gun and a list of names she intended to use both on. But vengeance is a flame swift extinguished. Betrayed by those she trusted most, her magic torn from her and awaiting execution, Sal the Cacophony has one last tale to tell before they take her head. All she has left is her name, her story and the weapon she used to carved both.

Vengeance is its own reward.

When this book first came out last year it got a ton of praise from fellow fantasy fans. Even though it’s over 700 pages Seven Blades in Black has been described as a fast paced book full of twists and turns. It has some western vibes and a main character out for vengeance. It sounds like something I might absolutely love, but part of me worries that I might get bored with this huge book.

The award-winning author of The Miseducation of Cameron Post makes her adult debut with this highly imaginative and original horror-comedy centered around a cursed New England boarding school for girls—a wickedly whimsical celebration of the art of storytelling, sapphic love, and the rebellious female spirit.

Our story begins in 1902, at The Brookhants School for Girls. Flo and Clara, two impressionable students, are obsessed with each other and with a daring young writer named Mary MacLane, the author of a scandalous bestselling memoir. To show their devotion to Mary, the girls establish their own private club and call it The Plain Bad Heroine Society. They meet in secret in a nearby apple orchard, the setting of their wildest happiness and, ultimately, of their macabre deaths. This is where their bodies are later discovered with a copy of Mary’s book splayed beside them, the victims of a swarm of stinging, angry yellow jackets. Less than five years later, The Brookhants School for Girls closes its doors forever—but not before three more people mysteriously die on the property, each in a most troubling way.

Over a century later, the now abandoned and crumbling Brookhants is back in the news when wunderkind writer, Merritt Emmons, publishes a breakout book celebrating the queer, feminist history surrounding the “haunted and cursed” Gilded-Age institution. Her bestselling book inspires a controversial horror film adaptation starring celebrity actor and lesbian it girl Harper Harper playing the ill-fated heroine Flo, opposite B-list actress and former child star Audrey Wells as Clara. But as Brookhants opens its gates once again, and our three modern heroines arrive on set to begin filming, past and present become grimly entangled—or perhaps just grimly exploited—and soon it’s impossible to tell where the curse leaves off and Hollywood begins.

A story within a story within a story and featuring black-and-white period illustrations, Plain Bad Heroines is a devilishly haunting, modern masterwork of metafiction that manages to combine the ghostly sensibility of Sarah Waters with the dark imagination of Marisha Pessl and the sharp humor and incisive social commentary of Curtis Sittenfeld into one laugh-out-loud funny, spellbinding, and wonderfully luxuriant read.

When this book turned up on my doorstep I couldn’t help but be intrigued. It looks dark, it’s set at a boarding school and it has gothic vibes, all things that I’ve been looking for in books recently. It promises mystery, horror and multiple timelines. But it’s not a fantasy and it’s over 600 pages. If I’m going to read a huge book it tends to be an epic fantasy, but it has so many elements that sound incredible. I’m excited by the idea of this book, but I’m also intimidated by it’s size and am afraid that it might disappoint.

Ashes of the Sun by Django Wexler

Long ago, a magical war destroyed an empire, and a new one was built in its ashes. But still the old grudges simmer, and two siblings will fight on opposite sides to save their world, in the start of Django Wexler’s new epic fantasy trilogy

Gyre hasn’t seen his beloved sister since their parents sold her to the mysterious Twilight Order. Now, twelve years after her disappearance, Gyre’s sole focus is revenge, and he’s willing to risk anything and anyone to claim enough power to destroy the Order.

Chasing rumors of a fabled city protecting a powerful artifact, Gyre comes face-to-face with his lost sister. But she isn’t who she once was. Trained to be a warrior, Maya wields magic for the Twilight Order’s cause. Standing on opposite sides of a looming civil war, the two siblings will learn that not even the ties of blood will keep them from splitting the world in two.

Ashes of the Sun really intimidates me. First of all, it’s nearly 600 pages, but it also has a huge glossary! The world building looks pretty intricate and that has me intimidated too. The reviews out there say that this book had a pretty fast pace and it focuses on a sibling relationship, which is one of my favorite topics to read about. 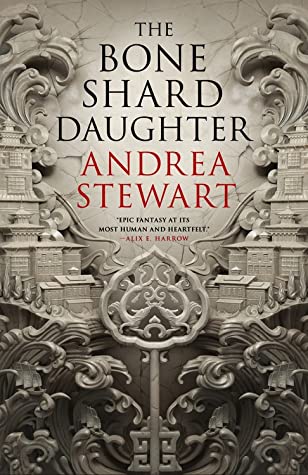 In an empire controlled by bone shard magic, Lin, the former heir to the emperor will fight to reclaim her magic and her place on the throne. The Bone Shard Daughter marks the debut of a major new voice in epic fantasy.

The emperor’s reign has lasted for decades, his mastery of bone shard magic powering the animal-like constructs that maintain law and order. But now his rule is failing, and revolution is sweeping across the Empire’s many islands.

Lin is the emperor’s daughter and spends her days trapped in a palace of locked doors and dark secrets. When her father refuses to recognise her as heir to the throne, she vows to prove her worth by mastering the forbidden art of bone shard magic.

Yet such power carries a great cost, and when the revolution reaches the gates of the palace, Lin must decide how far she is willing to go to claim her birthright – and save her people.

This book just came out last month and all of my friends seem to be raving about it. The magic system alone is incredibly intriguing! It’s under 500 pages, so the length isn’t the main thing that has me intimidated by this book. It’s all of the raving reviews. I hate being late to a book that is getting so much praise because it raises the expectations. I think I might stop reading the reviews for this one and just try and dive in.

What kind of books intimidate you? Are you intimidated by page counts? Does a books reputation intimidate you? How do you deal with books that you want to read that you’re intimidated by? Have you read any of the books above? What did you think? Make sure to comment below so we can talk about intimidating books!

27 thoughts on “Top 5 Intimidating Books I Want to Read”