Warmaidens is the dark, action-packed conclusion to the heartwrenching Gravemaidens fantasy duology. Kammani and the maidens are now going to war against the ruler who tried to entomb them.

Just a few moons after escaping the tomb in Alu, Kammani and the other runaway maidens have found refuge in the city-state of Manzazu. There, Kammani has become a respected healer, especially among the warriors she’s brought back from the brink of death. Now that the nightmares of Alu are fading, she can finally decide whether or not to take Dagan’s hand in marriage.

But when an assassin murders a healer he believes is Kammani and attempts to kill the displaced queen of Alu, the maidens realize they’ve been found.

Hungry for revenge, Manzazu’s queen wants to strike back at Alu with her fiercest weapons—her scorpion warrior maidens—but Kammani knows that war harms more than it heals. To save the innocents and any chance of a future with Dagan, Kammani must take down Alu’s ruler before their lives burn up in the flames of war.

This is yet another sequel. I swear this year has been all about series for me! I enjoyed the first book, but I kinda forgot what happened in it, so I’m going to have to read reviews and summaries before diving into this sequel. This is a duology, so it’s the last book in the series. I just remember that it was based on ancient Sumerian culture.

Check out my review of Gravemaidens!

The Cousins by Karen McManus

From the #1 New York Times bestselling author of One of Us Is Lying comes your next obsession. You’ll never feel the same about family again.

Milly, Aubrey, and Jonah Story are cousins, but they barely know each another, and they’ve never even met their grandmother. Rich and reclusive, she disinherited their parents before they were born. So when they each receive a letter inviting them to work at her island resort for the summer, they’re surprised . . . and curious.

Their parents are all clear on one point—not going is not an option. This could be the opportunity to get back into Grandmother’s good graces. But when the cousins arrive on the island, it’s immediately clear that she has different plans for them. And the longer they stay, the more they realize how mysterious—and dark—their family’s past is.

The entire Story family has secrets. Whatever pulled them apart years ago isn’t over—and this summer, the cousins will learn everything.

I really enjoyed One of Us is Lying and I’d love to read Karen McManus’ latest book. This one looks really good and I have no doubt that it will be a hit. I didn’t get an ARC, but I might pick this one up myself anyways because I love a good YA thriller every now and then. 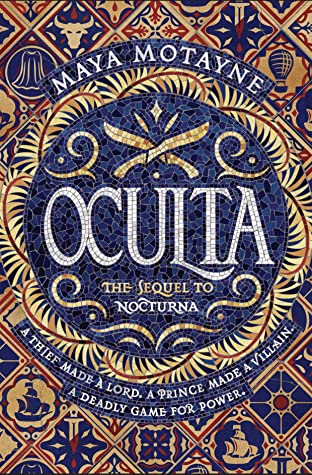 After joining forces to save Castallan from an ancient magical evil, Alfie and Finn haven’t seen each other in months. Alfie is finally stepping up to his role as heir and preparing for an International Peace Summit, while Finn is travelling and revelling in her newfound freedom from Ignacio.

That is, until she’s unexpectedly installed as the new leader of one of Castallan’s powerful crime families. Now one of the four Thief Lords of Castallan, she’s forced to preside over the illegal underground Oculta competition, which coincides with the summit and boasts a legendary prize.

Just when Finn finds herself back in San Cristobal, Alfie’s plans are also derailed. Los Toros, the mysterious syndicate responsible for his brother’s murder, has resurfaced—and their newest target is the summit. And when these events all unexpectedly converge, Finn and Alfie are once again forced to work together to follow the assassins’ trail and preserve Castallan’s hopes for peace with Englass.

But will they be able to stop these sinister foes before a new war threatens their kingdom?

I really enjoyed the first book in this series! I thought that the magic system was wicked cool and I can’t believe that I forgot the sequel was coming out! This is one that I wish I had an ARC of!

Check out my review of Nocturna! 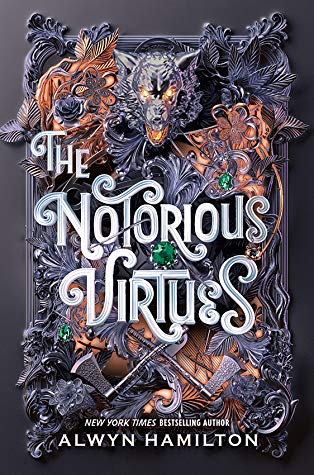 The Notorious Virtues by Alwyn Hamilton

A glamorous media darling, a surprise heiress, and the magical competition of a lifetime.

At sixteen, Honora “Nora” Holtzfall is the daughter of the most powerful heiress in all of Walstad. Her family controls all the money–and all the magic–in the entire country. But despite being the center of attention, Nora has always felt like an outsider. When her mother is found dead in an alley, the family throne and fortune are suddenly up for grabs, and Nora will be pitted against her cousins in the Veritaz, the ultimate magical competition for power that determines the one family heir.

But there’s a surprise contestant this time: Lotte, the illegitimate daughter of Nora’s aunt. When Lotte’s absent mother retrieves her from the rural convent she’d abandoned her to, Lotte goes from being an orphan to surrounded by family. Unfortunately, most of them want her dead.

And soon, Nora discovers that her mother’s death wasn’t random–it was murder. And the only person she can trust to uncover the truth of what happened is a rakish young reporter who despises everything Nora and her family stand for.

With everyone against her, Lotte’s last hope is hunting for the identity of her father. But the dangerous competition–and her feelings for Theo, one of the Holtzfalls’ sworn protectors–turns her world upside down.

Incredible tests, impossible choices and deadly odds await both girls. But there can only be one winner.

I heard about this book forever ago and I really want to read it. I feel like the release date has been moved over and over again. Goodreads says that it will be coming out in December, but I’m not sure if it really is. I hope this book comes out soon because I would really like to read it.

The troublemaker. The overachiever. The cheer captain. The dead girl.

Like every high school in America, Jefferson-Lorne High contains all of the above.

After the shocking murder of senior Emma Baines, three of her classmates are at the top of the suspect list: Claude, the notorious partier; Avery, the head cheerleader; and Gwen, the would-be valedictorian.

Everyone has a label, whether they like it or not–and Emma was always known as a good girl. But appearances are never what they seem. And the truth behind what really happened to Emma may just be lying in plain sight. As long-buried secrets come to light, the clock is ticking to find Emma’s killer–before another good girl goes down.

I really enjoyed this one. This was a fast paced and entertaining read that wound up being way better than I had anticipated. The early reviews were super mixed, but I gave it a chance and I wound up really enjoying it. I didn’t realize that it was told in mixed formats, but I actually really enjoyed that aspect of the book and it made me want to read other books that have mixed formats like The Good Girl’s Guide to Murder and Illuminae.

Look for my review coming this week!

Have you read any books coming out in December? Are there any that you would recommend? Are you looking forward to any of the titles that I listed? Have you read any of them yet? What did you think? Make sure to comment below so we can chat about December 2020 releases!

17 thoughts on “Looking Ahead… December 2020 Releases”