On the unforgiving streets of Karad, Veron grows up hungry, inexperienced, and stealing just to survive. After tragedy strikes, he is forced to decide what path his life will take.

Opportunity arises when he discovers the last survivor of a secret organization called the Shadow Knights. Apprenticed to learn their ways, Veron begins to develop abilities he never dreamed he could have.
Meanwhile, an enemy from across the mountains comes to destroy their kingdom’s way of life, and the Shadow Knights are the only ones able to stop him. As Veron fights to survive the city, he prepares to face his destiny 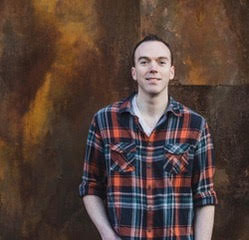 Michael Webb is a fantasy author who lives in Georgia, northwest of Atlanta. A graduate of Berry College, he is married and has a son. He began writing on a whim in 2019 and fell in love with it. In addition to finishing The Shadow Knights Trilogy, he plans to write additional books.

I am so thrilled to have the chance to interview Michael Webb as a part of my Indie Author Series. The Last Shadow Knight is an indie fantasy that I’m really excited for and interviewing him just made me that much more excited to read the book. I hope that you guys feel the same!

Q: Where did you get the idea for The Last Shadow Knight?

Actually, I came up with the name of the book first! I thought it sounded like a great book title. Then, I gave some thought to, “What would a last shadow knight do? What would that story be about?” Then, I decided what sort of characters I wanted and what plot points or moments I wanted to include. From that, I pieced it all together.

Q: What has been your favorite part of getting The Last Shadow Knight out into the world?

Being my first book, my primary motivation was in creating a story of my own and getting to share it
with others. So, my favorite thing is when I hear from someone I don’t know who has read it and they rave about how much they enjoyed it. It makes me want to keep writing more and more!

Q: How would you describe the main character Veron?

In a word, “True”. That’s where I derived the name, from the root word for “truth”. I want someone who embodies someone who is honest and hardworking. I wrote his character around aspects that I aspire for my son. Doing what’s right when there’s a difficult decision to make. Thinking of others more than yourself. Working hard to achieve something that is difficult. I tried to create Veron to have these characteristics.

Q: What were some of the things you researched while writing The Last Shadow Knight?

I spent a lot of time researching sword fighting—styles, techniques, terms, with different types of weapons. I tried to write my scenes with fighting to be as accurate as possible (although I’m sure they still have plenty of issues, ha). I also looked a lot into medieval roles, homes, government, food, etc. I tried to based my knowledge on medieval times, but purposely changed several aspects like hierarchy of government, financial systems, roles of servants (you’ll see more in Rise of the Shadow…book 2).

Q: Who are some of the authors that influenced you as a writer?

Brandon Sanderson was a heavy influence. Mistborn in particular. I LOVED that series, and I based a lot of the FEEL of my book on what I experienced when reading it. Another book that heavily influenced it was the Name of the Wind by Patrick Rothfuss. It’s my favorite book of all time. Although my prose pales in comparison to Rothfuss, I modeled much of Veron’s life around some of what Kvothe experienced in that book.

Q: How did your book change throughout the writing process?

The plot changed a little. When I worked with Beta readers, they came up with several suggestions that helped me tie some big plot points together much better than my original drafts. A big part was in how the story arcs of Veron and Chelci intertwined. Much of that was thanks to the help of my betas. The biggest thing that changed though was the style of writing. I’d never written a word of creative writing before I began this book, so I really didn’t know what I was doing. My early editing and beta readers tore it up (in a helpful way). I learned SO MUCH from their feedback, which always resulted in me writing the whole thing over again. Through all the revisions I went through, the writing style got tighter and tighter as I learned actually how to write. 🙂

Q: What book would you recommend fans of The Last Shadow Knight read?

Of course I would recommend the Name of the Wind. It’s my favorite book, and is amazing! Also Mistborn, which is awesome. Another book that I feel is similar to mine (in length, reader age, style) is Eragon. It’s a great, easy-to-read book.

I’ve been blown away by the response to the Last Shadow Knight. It’s far surpassing anything I expected from it. I’m even more excited now to continue writing. Thankfully, more books are coming! I hope to release the second book, Rise of the Shadow December 2021. And the final book of the Trilogy will hopefully be summer of 2022!

Are you excited for this book? Do you read indie books? What are some of your favorites? Is The Last Shadow Knight on you TBR? Make sure to comment below so we can chat about this book and interview!