Last week I posted a bunch of mini movie reviews and I thought it was fun, so I’m going to do it again! (Despite the fact that the post got plagiarized and the stress of trying to get the stolen post taken down.) Since the pandemic a lot of us are out of work and looking for movie recommendations so we have something to watch. I have been watching a ton of movies and I tend to go to Google for recommendations. But I trust my friends way more than I trust Google, so hopefully you guys can provide some recommendations for me!

Please comment below with some movie recommendations! (It will help my sanity to not have to spend 2 hours on Google looking for a movie.)

So here are some movies I watched recently along with my mini reviews!

While attending a dinner party at his former house, a man (Logan Marshall-Green) starts to believe that his ex-wife (Tammy Blanchard) and her new husband (Michiel Huisman) have sinister plans for the guests.

This movie came up in a search when I was looking for psychological thrillers. It didn’t really feel like a psychological thriller to me, but it did have a really eerie vibe to it. It wasn’t fantastic, but it was entertaining and it held my interest. It was more of a suspenseful film than a horror for sure, but my mom wouldn’t have liked it! I had started this movie on a previous occasion and turned it off in the first five minutes because the movie opens with a car hitting a coyote. WHICH WAS JUST SO UNNECESSARY! That didn’t need to be a part of the movie and it pissed me off. So the second time that I started the movie we fast forwarded right past that part. So, just as a warning for animal lovers like myself, you might want to skip the first five minutes or avoid this movie all together. 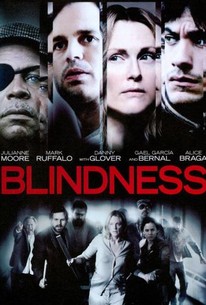 Streaming on Cinemax on Demand

A city is ravaged by an epidemic of instant white blindness. Those first afflicted are quarantined by the authorities in an abandoned mental hospital. Soon criminals and the physically powerful prey upon the weak, hording the meager food rations and committing horrific acts. There is however one eyewitness to the nightmare. A woman whose sight is unaffected by the plague follows her afflicted husband to quarantine.

Okay so this is basically just going to be a rant full of spoilers. For the first half of the film I was entertained and I could relate to the feeling of being quarantined during a pandemic. But then this movie took a sharp turn downhill and just kept going. Everyone who has become blind because of the pandemic is quarantined in a facility and eventually the strong make victims of the weak in there. It gets to a point where the brutal men decide that if anyone wants their food rations they will have to send women over. So basically the women get raped repeatedly so they can get food. Honestly it was freaking awful to watch. There were so many other ways this could have played out, and for some reason this movie just wanted to shock and terrorize its viewers. When I first saw The Blindness on demand I was like “How come I’ve never heard of this movie? It has so many stars.” And now I know why I haven’t heard of this movie. Do yourself a favor and skip this one.

Settling in for some time off in his suburban home, Ray Peterson’s (Tom Hanks) vacation becomes a horror when the Klopeks, a suspiciously odd family, move in down the block. Enlisting the aid of his paranoid buddy, Art (Rick Ducommun), and his militia-man neighbor, Rumsfield (Bruce Dern), Ray sends his son and wife (Carrie Fisher) away on a trip while he investigates the Klopeks. When a neighbor disappears, Ray and his cohorts risk their lives to save their cul-de-sac from the clutches of evil.

So this is actually a re-watch, but it’s a classic. The Burbs is a really old Tom Hanks movie that I only discovered last year. I absolutely love Tom Hanks, and this movie just kind of makes me smirk. It’s so ridiculous that it’s funny and the humor is pretty great too. I watched this with my dad who had never seen it before and he really enjoyed it. This is just a classic comedy that I don’t think will ever get old. Since I discovered this movie last year I’ve probably seen it about 4 times now and I still love it.

In the Tall Grass

A brother and sister enter a field of tall grass to rescue a boy, but they soon realize they cannot escape and something evil lurks in the grass.

I discovered this movie when searching for psychological thrillers, and wow. This movie really twisted my mind in knots. I was so captivated and this movie was crazy! It had some great jump scares and had me on the edge of my seat. At the end of the movie I was trying to puzzle out how it all happened and I probably talked about this movie afterwards for a good half hour. If you enjoy horror or psychological thrillers, you have to check this one out! Apparently this was originally a novella written by Stephen King, and it definitely has his horror vibe to it. I was actually pretty impressed with this one. Plus I could totally relate to being lost in the tall grass because last fall I did a corn maze and I got stuck in there for over 3 hours.

A caregiver is drawn into a web of lies and murder after a wealthy elderly man dies and leaves his estate to her.

I found this movie just scrolling through Netflix. I saw that it had Veronica (Camilla Mendez) from Riverdale in it, and I wanted to give it a shot. But honestly, I was a little bored with this one. It was decent and had a good twist to it, but I wasn’t captivated. It was just kind of a mediocre movie, but it wasn’t bad. My dad seemed to love it though, so maybe it’s just me. I just didn’t find the mystery compelling enough and I absolutely hated the husband throughout the entire movie.

Streaming on HBO on Demand

Keller Dover (Hugh Jackman) faces a parent’s worst nightmare when his 6-year-old daughter, Anna, and her friend go missing. The only lead is an old motorhome that had been parked on their street. The head of the investigation, Detective Loki (Jake Gyllenhaal), arrests the driver (Paul Dano), but a lack of evidence forces Loki to release his only suspect. Dover, knowing that his daughter’s life is at stake, decides that he has no choice but to take matters into his own hands.

This was actually pretty good! It was pretty twisted in some parts, but was really compelling. I thought Hugh Jackman’s acting was absolutely incredible and you could really empathize with him. Despite his questionable choices I did admire how he would go to any lengths to find his daughter. The investigation was really cool and probably would have kept me guessing, but my dad actually figured out who abducted the girls way faster than I would have guessed. But despite the fact that he predicted the ending I still really liked this film. Although I do have to say I thought the villain’s acting was mediocre. I would watch this movie again.

Have you seen any of these movies? What did you think? Do you have any movie recommendations for me? Have you been watching a lot more movies since the pandemic started? What kinds of movies do you like to watch? Make sure to comment below so we can chat about movies we’ve seen recently!