I had every intention of getting this post up on time, but the internet was down. So I’m late posting once again!

Debut novels are a little scary to pick up. You have no idea if the author is going to be any good, or if you’re going to like the writing style. But a lot of times I discover amazing new authors and wind up following them throughout their entire career. It is amazing to watch authors grow throughout their writing career and I don’t think I will ever stop giving new authors a chance. When I was checking out the upcoming books that I wanted to read I did notice that a lot of them were sequels or trusted authors, but there were also several books that I was very excited for from brand new authors. Last year I discovered some truly amazing authors by reading their debut novels and I hope to discover a bunch more this year as well. These are the top 5 debut novels that I’m most excited for!

A forest, besieged. A queen, unyielding. Fans of Leigh Bardugo and Holly Black will devour this deliciously dark Eastern European–inspired YA fantasy debut.

When the Golden Dragon descended on the forest of Kamiena, a horde of monsters followed in its wake.

Ren, the forest’s young queen, is slowly losing her battle against them. Until she rescues Lukasz—the last survivor of a heroic regiment of dragon slayers—and they strike a deal. She will help him find his brother, who vanished into her forest… if Lukasz promises to slay the Dragon.

But promises are all too easily broken.

Okay so after reading Ghost Wood Song I am dying for another dark fantasy with fabulous writing and from the reviews Don’t Call the Wolf seems to fit the bill perfectly. It’s also filled with Polish mythology which I’m pretty interested to see. The early reviews seem a bit mixed, but this will probably be the next book that I read. 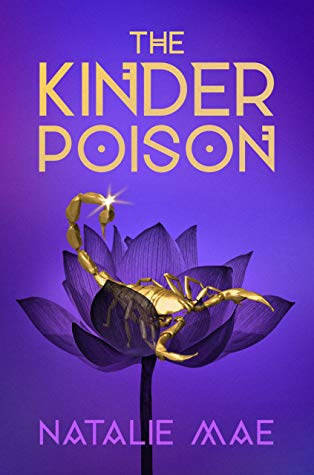 The Kinder Poison by Natalie Mae

Perfect for fans of Victoria Aveyard and Holly Black, this enthralling fantasy adventure follows a teenage girl chosen to be the human sacrifice in a deadly game between three heirs who will do anything for the crown.

Zahru has long dreamed of leaving the kingdom of Orkena and having the kinds of adventures she’s only ever heard about in stories. But as a lowly Whisperer, her power to commune with animals means that her place is serving in the royal stables until the day her magic runs dry.

All that changes when the ailing ruler invokes the Crossing: a death-defying race across the desert, in which the first of his heirs to finish—and take the life of a human sacrifice at the journey’s end—will ascend to the throne and be granted unparalleled abilities.

With all of the kingdom abuzz, Zahru leaps at the chance to change her fate if just for a night by sneaking into the palace for a taste of the revelry. But the minor indiscretion turns into a deadly mistake when she gets caught up in a feud between the heirs and is forced to become the Crossing’s human sacrifice. Zahru is left with only one hope for survival: somehow figuring out how to overcome the most dangerous people in the world.

I will admit that this mainly wound up on my TBR because of the cover, but I do think that the blurb sounds right up my alley. I have really enjoyed quite a few books with desert settings and the plot sounds intriguing as well. There aren’t a ton of early reviews, but so far everyone who has reviewed the book raves about it. I haven’t gotten my hands on a review copy just yet, but hopefully I can get my hands on a copy.

Sawkill Girls meets Beautiful Creatures in this lush and eerie debut, where the boundary between reality and nightmares is as thin as the veil between the living and the dead.

If I could have a fiddle made of Daddy’s bones, I’d play it. I’d learn all the secrets he kept.

Shady Grove inherited her father’s ability to call ghosts from the grave with his fiddle, but she also knows the fiddle’s tunes bring nothing but trouble and darkness.

But when her brother is accused of murder, she can’t let the dead keep their secrets.

In order to clear his name, she’s going to have to make those ghosts sing.

Family secrets, a gorgeously resonant LGBTQ love triangle, and just the right amount of creepiness make this young adult debut a haunting and hopeful story about facing everything that haunts us in the dark.

Okay so technically I have already read this book, but I wanted to include it on this list because it had some of the best writing I’d seen in a long time, plus it doesn’t come out until July and I thought it deserved some hype. Erica Waters is an author I am going to watch because the writing was so gothic and atmospheric and reminded me of April Genevieve Tucholke’s Between the Devil and the Deep Blue Sea, which is one of my all time favorite books. (Check out the review here.) Erica Waters has incredible talent and I’m already dying to hear if she’s working on another book.

For fans of Sorcery of Thorns and Furyborn comes a thrilling new fantasy about a kingdom ravaged by war, and the princess who might be the key to saving not only those closest to her, but the kingdom itself, if she reveals the very secret that could destroy her.

The kingdom of Hálendi is in trouble. It’s losing the war at its borders, and rumors of a new, deadlier threat on the horizon have surfaced. Princess Jennesara knows her skills on the battlefield would make her an asset and wants to help, but her father has other plans.

As the second-born heir to the throne, Jenna lacks the firstborn’s–her brother’s–magical abilities, so the king promises her hand in marriage to the prince of neighboring Turia in exchange for resources Hálendi needs. Jenna must leave behind everything she has ever known if she is to give her people a chance at peace.

Only, on the journey to reach her betrothed and new home, the royal caravan is ambushed, and Jenna realizes the rumors were wrong–the new threat is worse than anyone imagined. Now Jenna must decide if revealing a dangerous secret is worth the cost before it’s too late–for her and for her entire kingdom.

I almost didn’t request a review copy of this because I’m not a huge fan of illustrated covers, but the early reviews are basically gushing love letters, so obviously that got my attention. This is apparently fast paced and the kind of book that might have me up late reading. I NEED books like that, so I know that I will totally wind up reading this one.

The Dark Tide by Alicia Jasinska

The Wicked Deep meets A Curse So Dark and Lonely in this gripping, dark fairy-tale fantasy about two girls who must choose between saving themselves, each other, or their sinking island city.

Every year on St. Walpurga’s Eve, Caldella’s Witch Queen lures a boy back to her palace. An innocent life to be sacrificed on the full moon to keep the island city from sinking.

Lina Kirk is convinced her brother is going to be taken this year. To save him, she enlists the help of Thomas Lin, the boy she secretly loves, and the only person to ever escape from the palace. But they draw the queen’s attention, and Thomas is chosen as the sacrifice.

Queen Eva watched her sister die to save the boy she loved. Now as queen, she won’t make the same mistake. She’s willing to sacrifice anyone if it means saving herself and her city.

When Lina offers herself to the queen in exchange for Thomas’s freedom, the two girls await the full moon together. But Lina is not at all what Eva expected, and the queen is nothing like Lina envisioned. Against their will, they find themselves falling for each other. As water floods Caldella’s streets and the dark tide demands its sacrifice, they must choose who to save: themselves, each other, or the island city relying on them both.

Okay so I know a lot of the books on this list are dark fantasies, but I’m totally loving those lately! This is a Beauty and the Beast re-telling and it’s compared to A Curse So Dark and Lonely, I am reading the sequel to that book right now and loving it. I love dark fairy tale re-tellings and I have high hopes for this one! The Beast is also a witch in this book, which I think is a really cool take on Beauty and the Beast and I hope that it will have an original feel to it.

Check Out Other Book Blogger’s Top 5!

Susan @ Novel Lives — Hold On To Your Feels! Saturday Top 5 Debut Authors Coming To Drop the Hammer on Readers

Becky @ Becky’s Book Blog — What do you mean this is a Debut? – Top 5 Saturday

Laurie @ Read Between the Skylines

M.T. Wilson @ The Last Book on the Left

14 thoughts on “Top 5 Debut Novels I Want to Read”