Books by the Sea

Okay so I know that for some people this is going to be difficult because I’ve had both Pirates and Mermaids as top 5 Saturday topics before. But I feel like books by the sea is pretty broad so… I’m doing it anyway. I have really loved books set on boats or just set in towns that make their living off the sea. A good sea setting tends to be a wonderful set up for an adventurous novel. I have enjoyed so many books that were set on the sea, especially lately, but The Bone Ships is probably the book that got me searching for pirate books or books with a sea setting in the first place. I loved that book so freaking much and I’m dying for the sequel. (Check out my review here!) Anyways, these are some books with sea settings I’m dying to read! 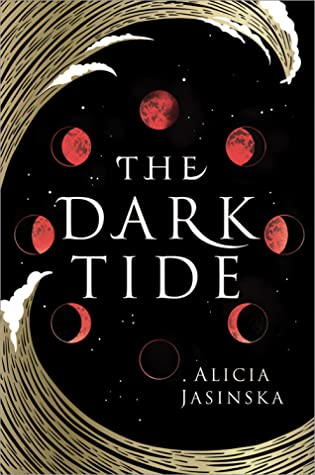 The Dark Tide by Alicia Jasinska

The Wicked Deep meets A Curse So Dark and Lonelyin this gripping, dark fairy-tale fantasy about two girls who must choose between saving themselves, each other, or their sinking island city.

Every year on St. Walpurga’s Eve, Caldella’s Witch Queen lures a boy back to her palace. An innocent life to be sacrificed on the full moon to keep the island city from sinking.

Lina Kirk is convinced her brother is going to be taken this year. To save him, she enlists the help of Thomas Lin, the boy she secretly loves, and the only person to ever escape from the palace. But they draw the queen’s attention, and Thomas is chosen as the sacrifice.

Queen Eva watched her sister die to save the boy she loved. Now as queen, she won’t make the same mistake. She’s willing to sacrifice anyone if it means saving herself and her city.

When Lina offers herself to the queen in exchange for Thomas’s freedom, the two girls await the full moon together. But Lina is not at all what Eva expected, and the queen is nothing like Lina envisioned. Against their will, they find themselves falling for each other. As water floods Caldella’s streets and the dark tide demands its sacrifice, they must choose who to save: themselves, each other, or the island city relying on them both.

This book is supposed to be super atmospheric and have a gothic vibe to it. I’m all about that kind of stuff and I’m totally here for the witchy world building too! I’ve heard that the atmosphere and world building are both incredible and I’m really excited for it. It’s set on an island that’s sinking too and there is even a sea serpent!

Welcome to a world made dangerous by the sea and by those who wish to profit from it. Where a young girl must find her place and her family while trying to survive in a world built for men.

As the daughter of the most powerful trader in the Narrows, the sea is the only home seventeen-year-old Fable has ever known. It’s been four years since the night she watched her mother drown during an unforgiving storm. The next day her father abandoned her on a legendary island filled with thieves and little food. To survive she must keep to herself, learn to trust no one and rely on the unique skills her mother taught her. The only thing that keeps her going is the goal of getting off the island, finding her father and demanding her rightful place beside him and his crew. To do so Fable enlists the help of a young trader named West to get her off the island and across the Narrows to her father.

But her father’s rivalries and the dangers of his trading enterprise have only multiplied since she last saw him and Fable soon finds that West isn’t who he seems. Together, they will have to survive more than the treacherous storms that haunt the Narrows if they’re going to stay alive.

Okay so technically I’ve already read this book, but it doesn’t come out until fall and I’m holding my review until closer to publication. Plus it totally deserves some hype! This book got me out of my horrible coronavirus induced slump and just reminded me why I love reading. This book had an amazing crew, a found family and a search for treasure. Plus the characters are freaking amazing. I am so thrilled this is going to be a series and isn’t a standalone because I was so sad when it ended.

These Rebel Waves by Sara Raasch

Adeluna is a soldier. Five years ago, she helped the magic-rich island of Grace Loray overthrow its oppressor, Argrid, a country ruled by religion. But adjusting to postwar life has not been easy. When an Argridian delegate vanishes during peace talks with Grace Loray’s new Council, Argrid demands brutal justice—but Lu suspects something more dangerous is at work.

Devereux is a pirate. As one of the outlaws called stream raiders who run rampant on Grace Loray, he pirates the island’s magic plants and sells them on the black market. But after Argrid accuses raiders of the diplomat’s abduction, Vex becomes a target. An expert navigator, he agrees to help Lu find the Argridian—but the truth they uncover could be deadlier than any war.

Benat is a heretic. The crown prince of Argrid, he harbors a secret obsession with Grace Loray’s forbidden magic. When Ben’s father, the king, gives him the shocking task of reversing Argrid’s fear of magic, Ben has to decide if one prince can change a devout country—or if he’s building his own pyre.

As conspiracies arise, Lu, Vex, and Ben will have to decide who they really are . . . and what they are willing to become for peace.

This book just sounds so thrilling. There are pirates and magic plants and it’s set in a complex world. From the blurb alone I can tell this is my type of book, but based on the reviews I think this is up my alley. I love complex worlds and political fantasy. I hope I get my hands on this soon!

The Wicked Deep by Shea Ernshaw

Welcome to the cursed town of Sparrow…

Where, two centuries ago, three sisters were sentenced to death for witchery. Stones were tied to their ankles and they were drowned in the deep waters surrounding the town.

Now, for a brief time each summer, the sisters return, stealing the bodies of three weak-hearted girls so that they may seek their revenge, luring boys into the harbor and pulling them under.

Like many locals, seventeen-year-old Penny Talbot has accepted the fate of the town. But this year, on the eve of the sisters’ return, a boy named Bo Carter arrives; unaware of the danger he has just stumbled into.

Mistrust and lies spread quickly through the salty, rain-soaked streets. The townspeople turn against one another. Penny and Bo suspect each other of hiding secrets. And death comes swiftly to those who cannot resist the call of the sisters.

But only Penny sees what others cannot. And she will be forced to choose: save Bo, or save herself.

On the surface level The Wicked Deep and The Dark Tide sound pretty similar, both books are described as atmospheric and include witches and yearly drownings of local boys, but that’s where the similarities end. This book sounds like more of a haunting and has received a ton of hype. I’m very excited for both books and obviously these concepts have me sold.

A Song Below Water by Bethany C. Morrow

Tavia is already at odds with the world, forced to keep her siren identity under wraps in a society that wants to keep her kind under lock and key. Never mind she’s also stuck in Portland, Oregon, a city with only a handful of black folk and even fewer of those with magical powers. At least she has her bestie Effie by her side as they tackle high school drama, family secrets, and unrequited crushes.

But everything changes in the aftermath of a siren murder trial that rocks the nation; the girls’ favorite Internet fashion icon reveals she’s also a siren, and the news rips through their community. Tensions escalate when Effie starts being haunted by demons from her past, and Tavia accidentally lets out her magical voice during a police stop. No secret seems safe anymore—soon Portland won’t be either.

Initially I wasn’t sure I wanted to read this because the last few books I’d read about sirens were kind of disappointing, but when I really read the blurb I realized it was set in our world, but people knew sirens existed and I found that more enticing than a fantasy setting. A lot of my friends have given this book 5 stars so I’m hopeful that I will love it too!

Dini @ Dinipandareads — Top 5 Saturday: Books Set On/Near the Sea
Blair @ Feed the Crime — -|Books I’ve Read Set Near the Sea… Top 5 Saturday|-
Susan @ Novel Lives — Books by the Sea? Nah. I’d Like to Discuss Books to Chunk in the Sea…. It’s Salty and So Am I